Heading north up the Sakonnet River brought back some wonderful memories. As a teenager I had sailed here often. We anchored just north of Fogland Point and enjoyed a great sunset and sunrise the next morning. With little wind we motored up through the Tiverton Basin and then under the new Sakonnet River Bridge on our way up the Providence River to meet Steve and Karen (Sol Mate). Along the way the wind picked up and we were able to sail to the Rhode Island Yacht Club very close to their home. Steve and Karen were gracious hosts and we enjoyed seeing them again.
Having a south west wind “On the Nose” we opted to motor down to Point Judith staying in the Harbor of Refuge for the night. This would give us a short sail to Block Island in the morning. Sailing in Narragansett Bay was indeed Déjà vu All Over Again!

Who was that woman out in the cockpit asking me to look at a boat? Couldn’t be Ginnie, she simply doesn’t look at boats. After many years of trying to get her to look at boats that I found interesting, this was too good to be true. This woman looks and sounds like Ginnie, but asking me to come up to see a boat that interests her, this had to be something special.
Sitting on anchor in Onset Harbor we noticed that the name of the boat was Lucille. After a quick search of the USCG Documentation Database we discovered that it was a Defever 45 trawler, and she was right, it is a great looking boat. We dinghied over to see if anyone was aboard but didn’t see any activity. The next morning we left early heading down Buzzards Bay for the Sakonnet River. About two hours out we were hailed on the VHF by Lucille. The owners Bill and Sandy called to tell us that they knew many Saga 43 owners and that they had sold their Sage 43 to move over to the dark side purchasing the Defever 45. We discussed our near future cruising plans and decided to meet in Block Island so they could give us a tour of Lucille. 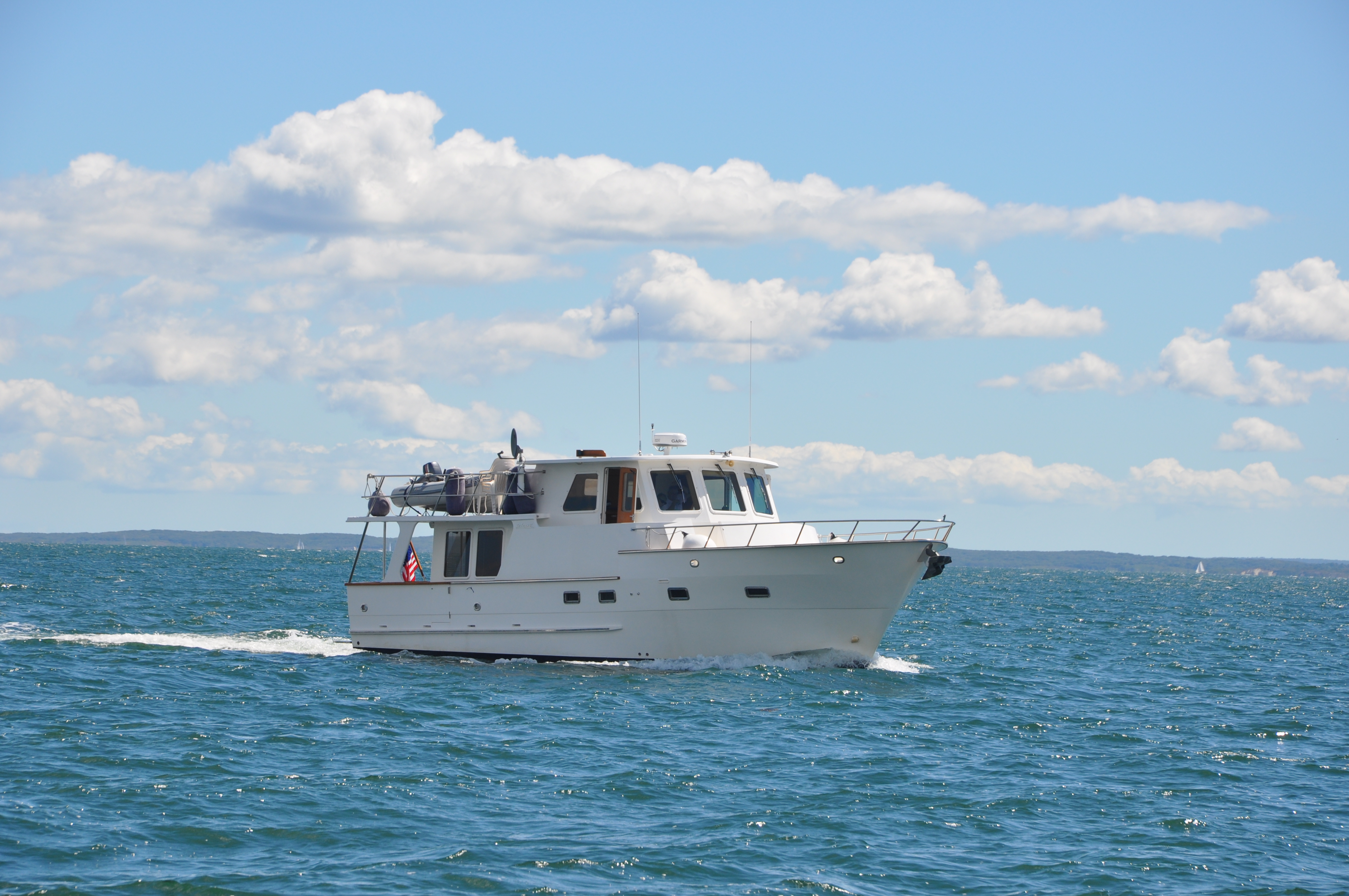 When we were approaching Dolphin Marine our friends George and Pat on Theodore happen to hear us on the VHF requesting a spot at the dock so that we could take on fuel and water. They just happened to be on the same frequency. Being not too far away we made plans to cruise together for a while. Our next stop was in Portsmouth, NH for a couple nights then on to Salem, MA where we also spent two nights. 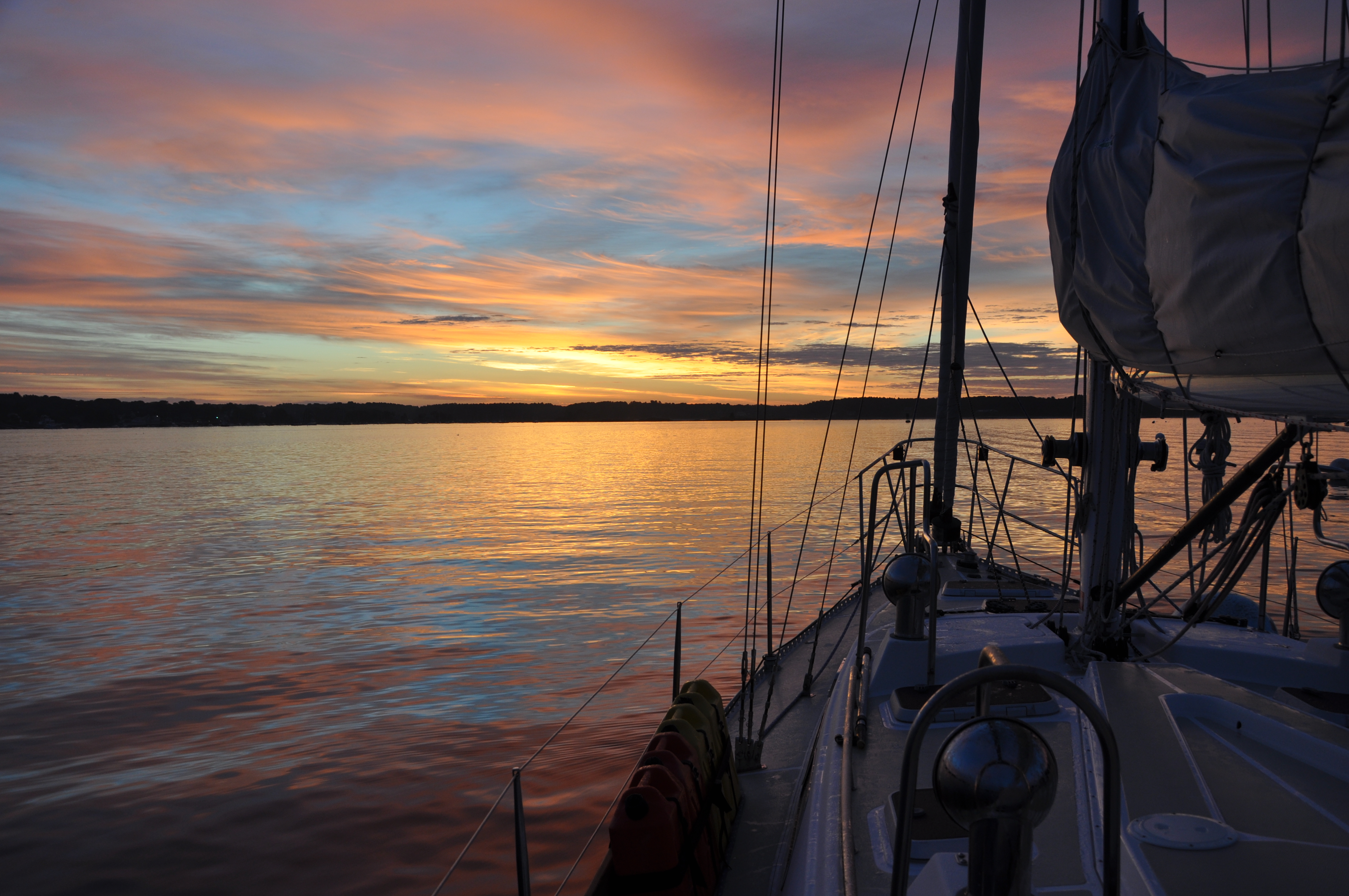 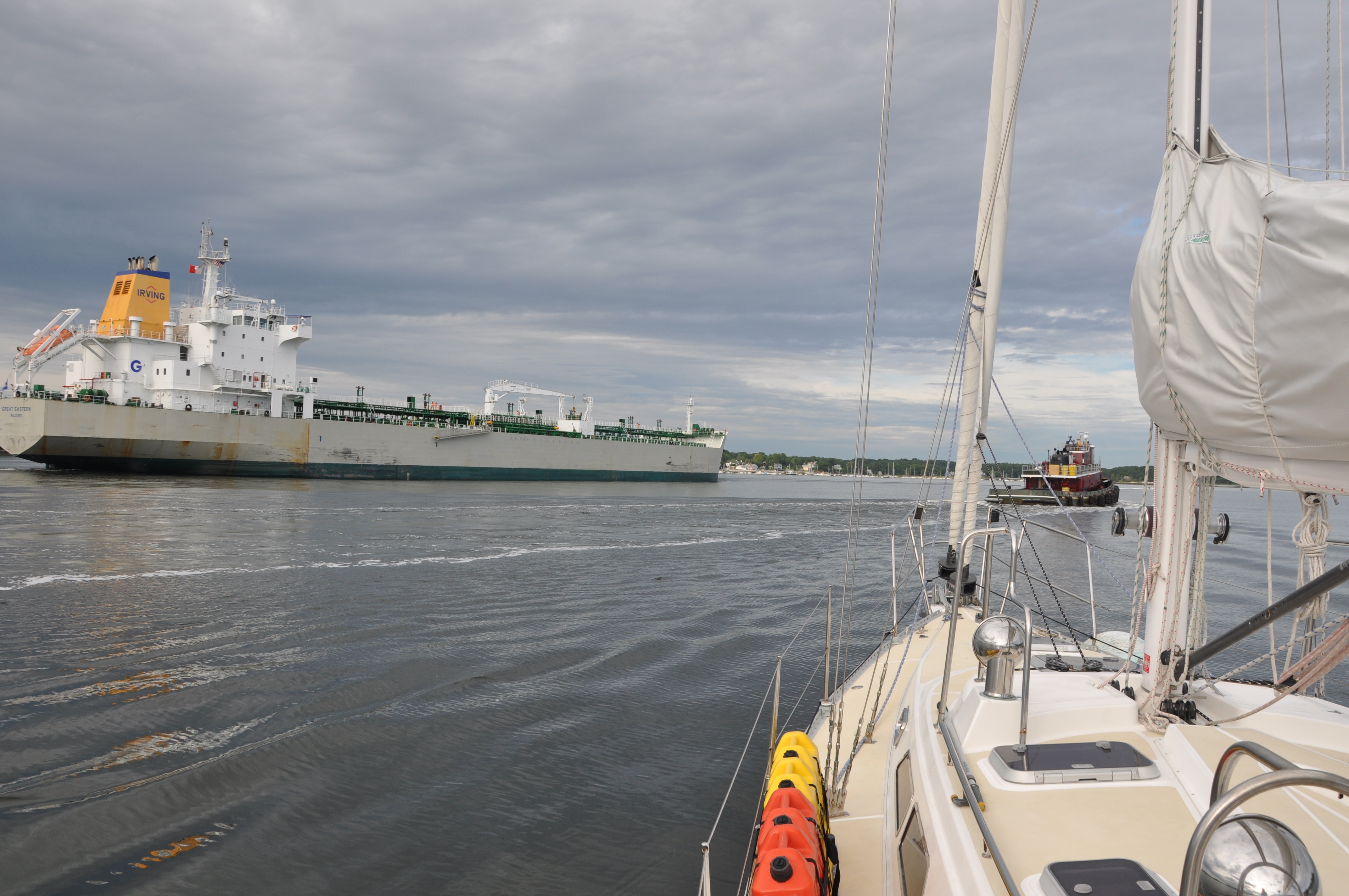 A busy harbor, that tug was a lot closer than it appears in the photo. 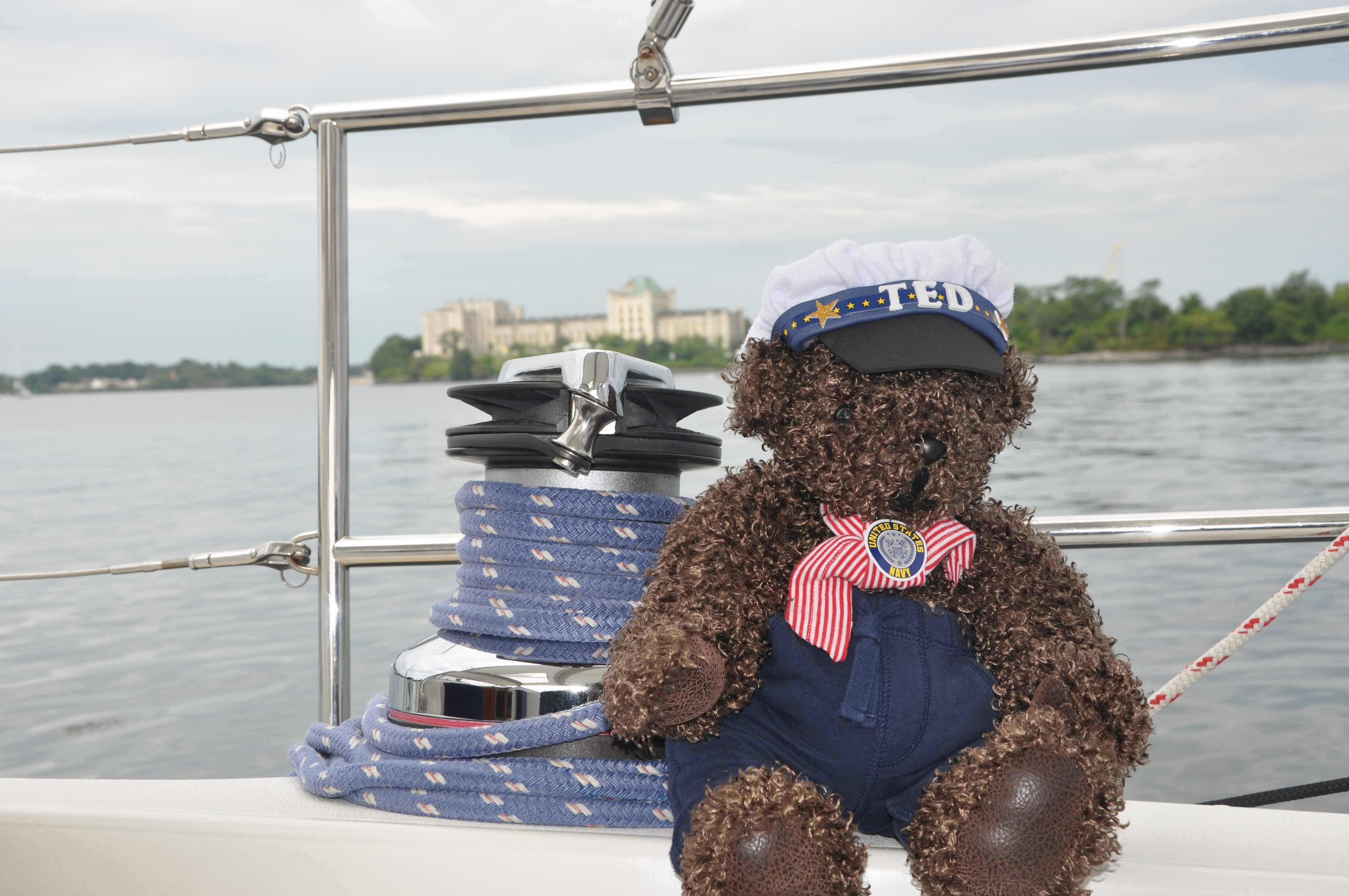 Capt Ted Bear, our newest crew member happy to not be staying at the building in the background.  The old Portsmouth Navy Brig.  Capt Ted Bear is one of Linda’s newest creations and we are delighted to have him ob board.  Thanks Linda.
We both departed Salem for Provincetown where we were going to meet Don and Bev. Don and I had been shipmates on board the USS Rehoboth many, many years ago. We were looking forward to seeing them again.
When we were about 12 miles from P-Town we heard the Coast Guard warning of a boat on fire in Provincetown Harbor. The boat sadly burned to the waterline but no one was hurt. The photo below is the smoke we saw from 12 miles out.

Ginnie had been looking forward to seeing some whales sometime on this trip. George and Pat turned north to Stellwegen Bank to the area frequented by the local whale watcher boats. Ginnie and I were more interested in getting into P-Town early, so if we didn’t see any whales on our path we would take a whale watching tour out of P-Town. As we were heading into P-Town, just off Herring Cove Beach, we received a call from Theodore saying that there was a pod of finback whales just off the beach. They had found no whales at Stellwegan Bank, but here they were so close to shore. 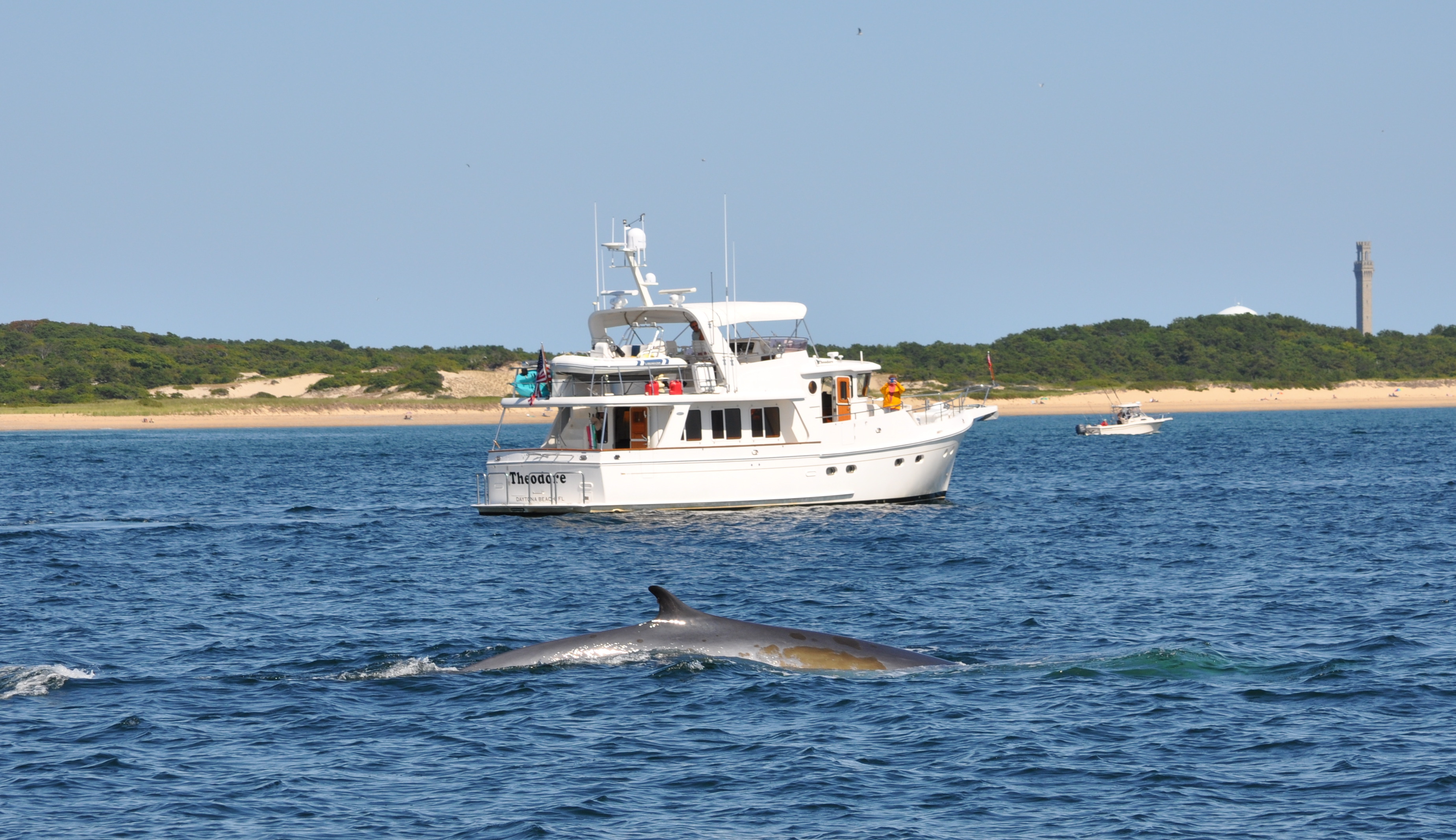 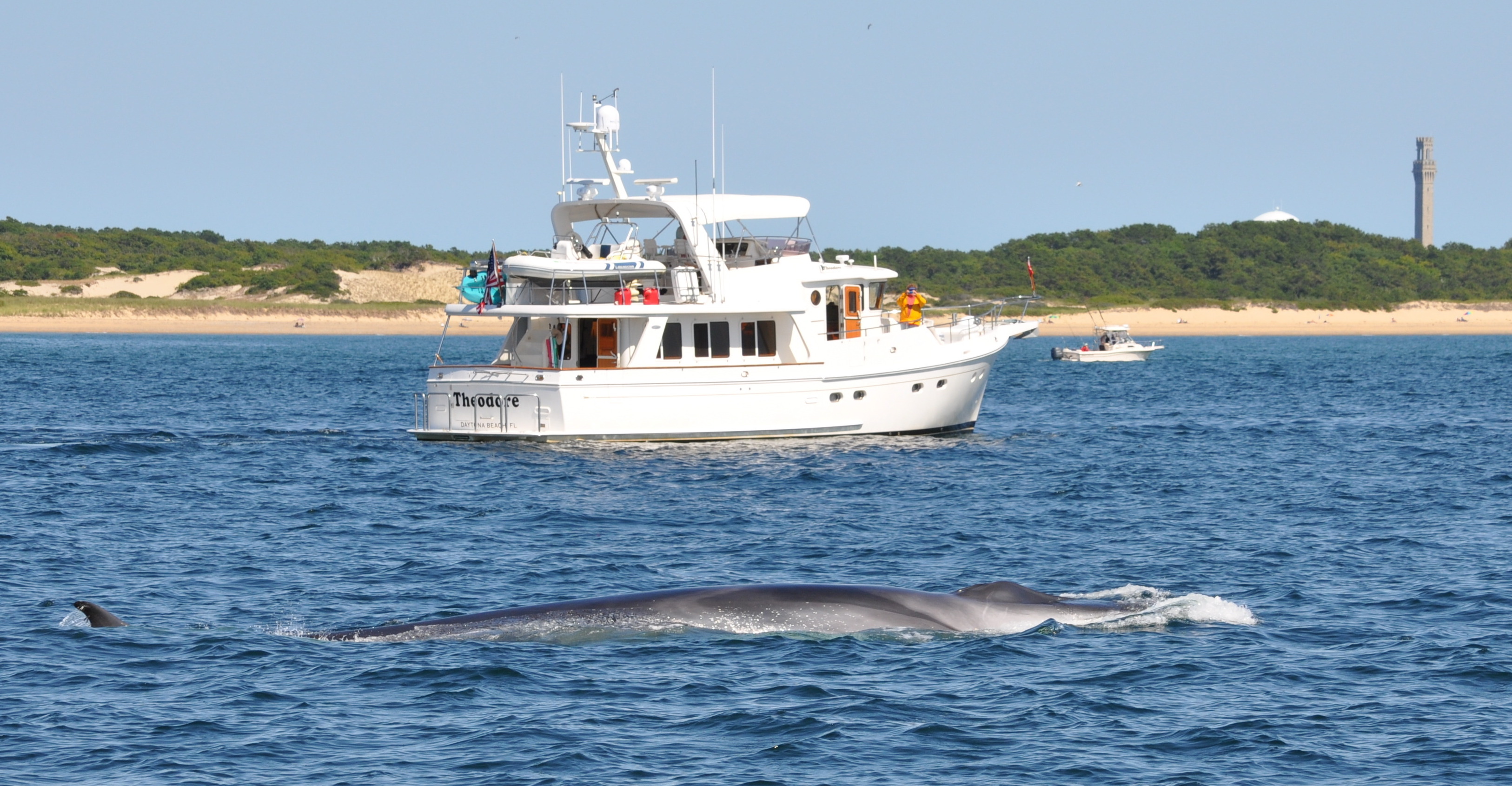 The next three photos show a whale turning and diving under Firecracker…Yikes that was close! 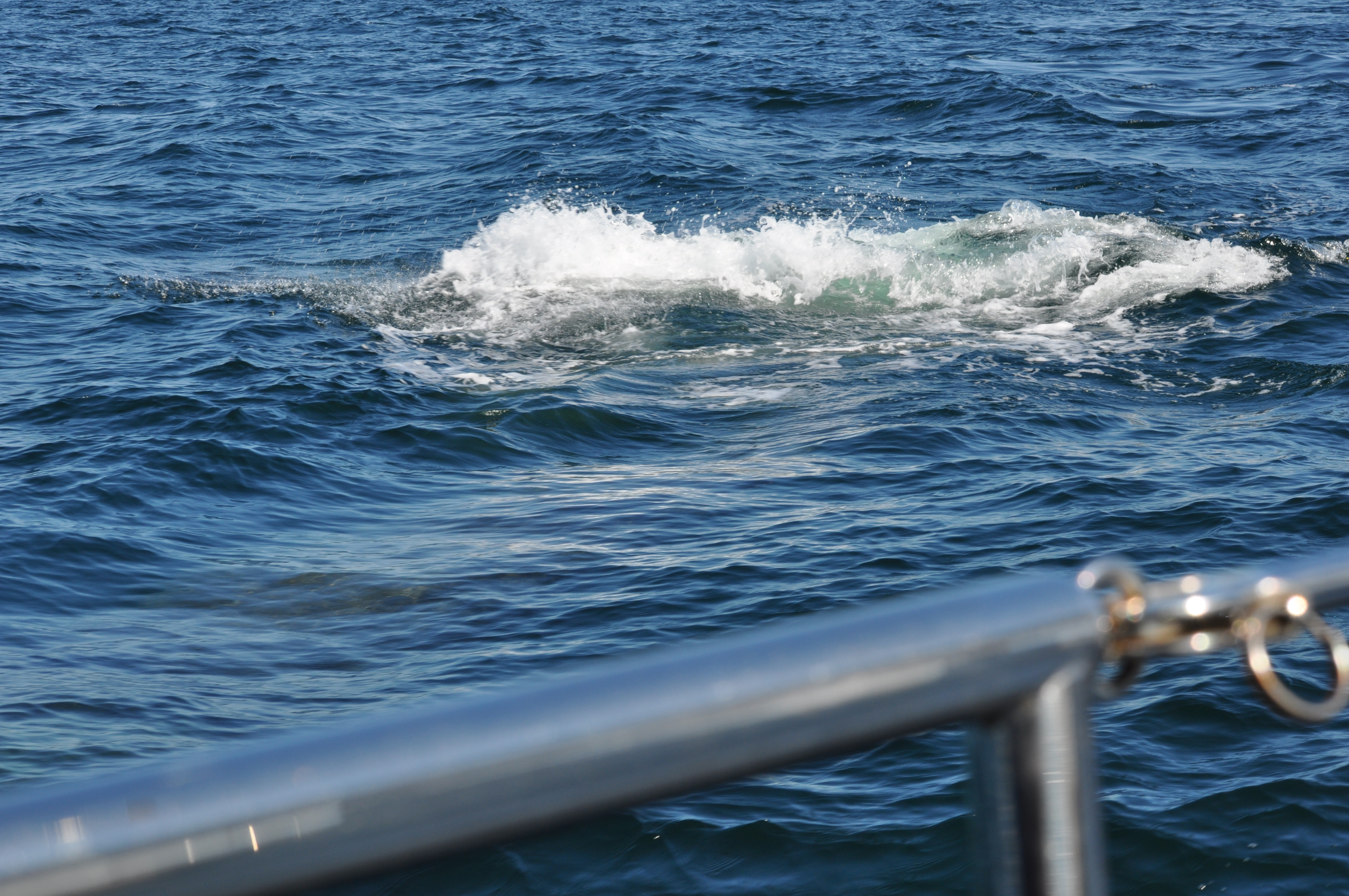 Second in size only to the blue whale, the finback reaches about 70 feet in length and weighs up to 70 tons. It shares with the blue whale the distinction of having the deepest voice on earth. The body is dark blue-gray above and whitish-yellow below, with a rather pointed head and a prominent back and dorsal fin which are easy to see. Cruising at an average speed of 12 knots, the finback is one of the fastest of the large whales, capable of short bursts of speed up to 30 knots. This species also makes some of the deepest dives of the baleen whales, up to 1800 feet deep, and has remained submerged for as long as 50 minutes on a single breath. The “V” shaped spout can rise as high as 20 feet. Finbacks tend to be restless and easily spooked. They avoid noisy boats, but will swim up beside a stopped vessel.
After settling in on our moorings George called us to go look for seals in the harbor. We had seen many seals on this trip but nothing to compare with this experience. We shut off the dinghy engine and drifted close to get some great shots. 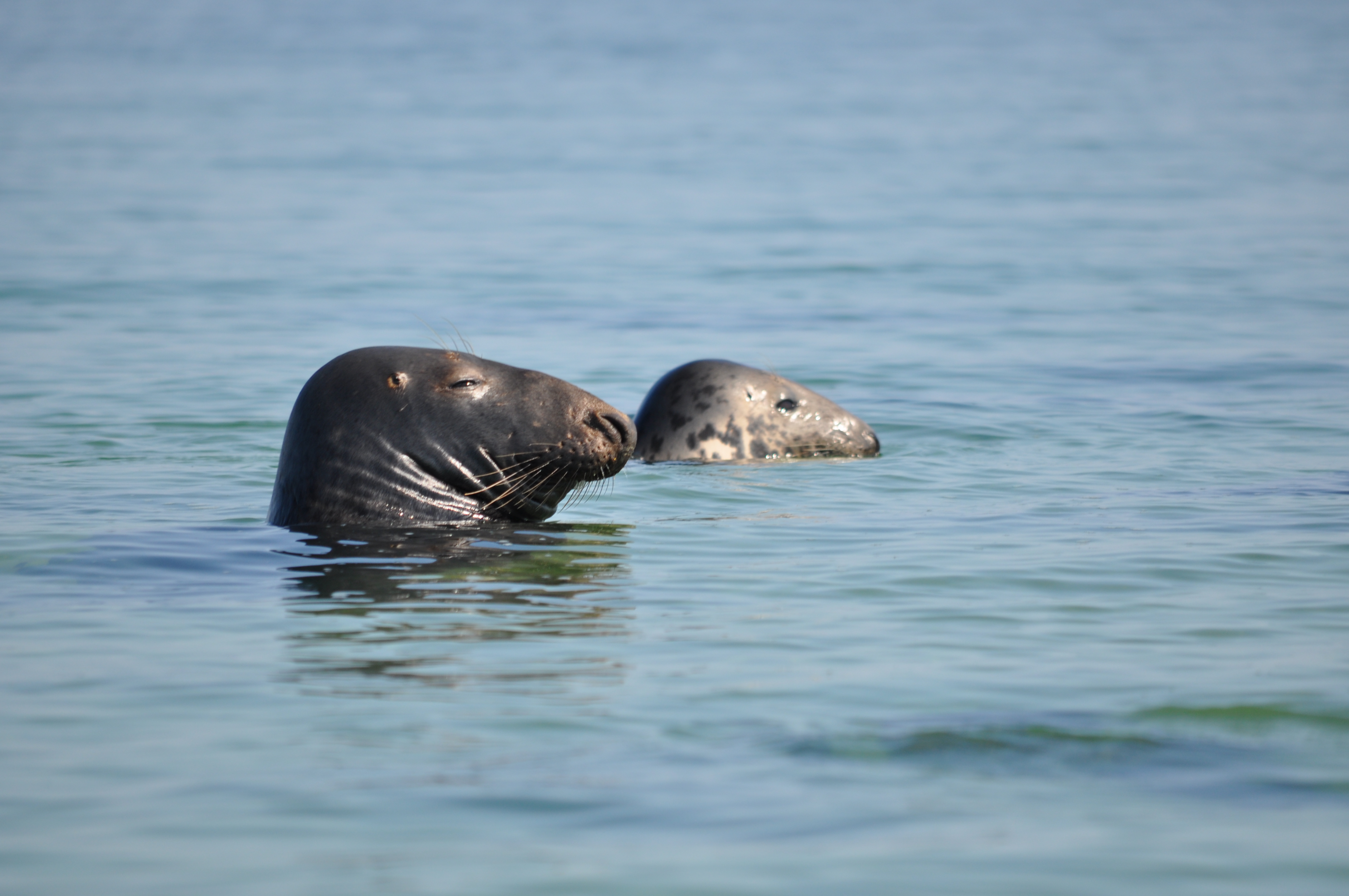 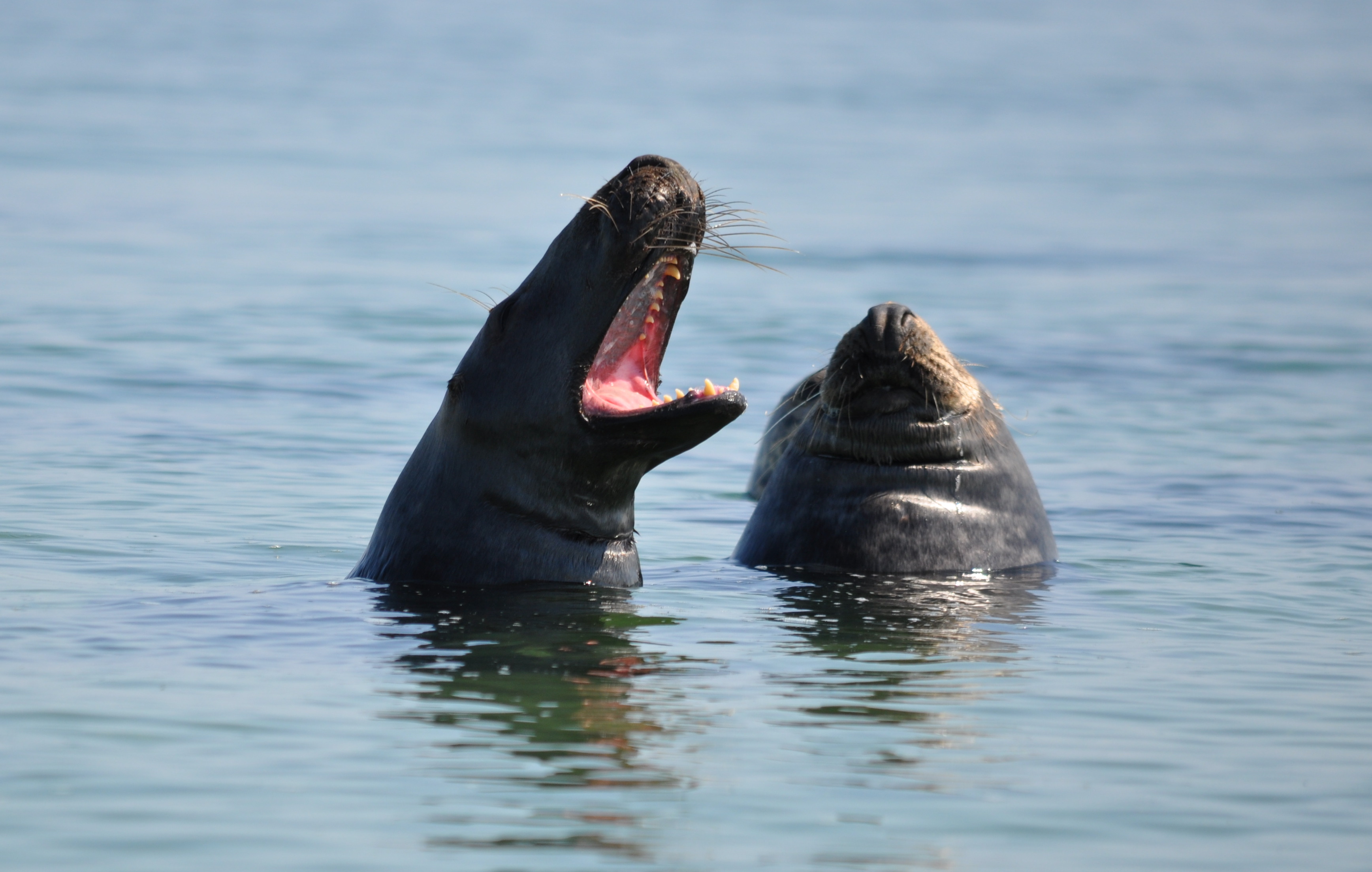 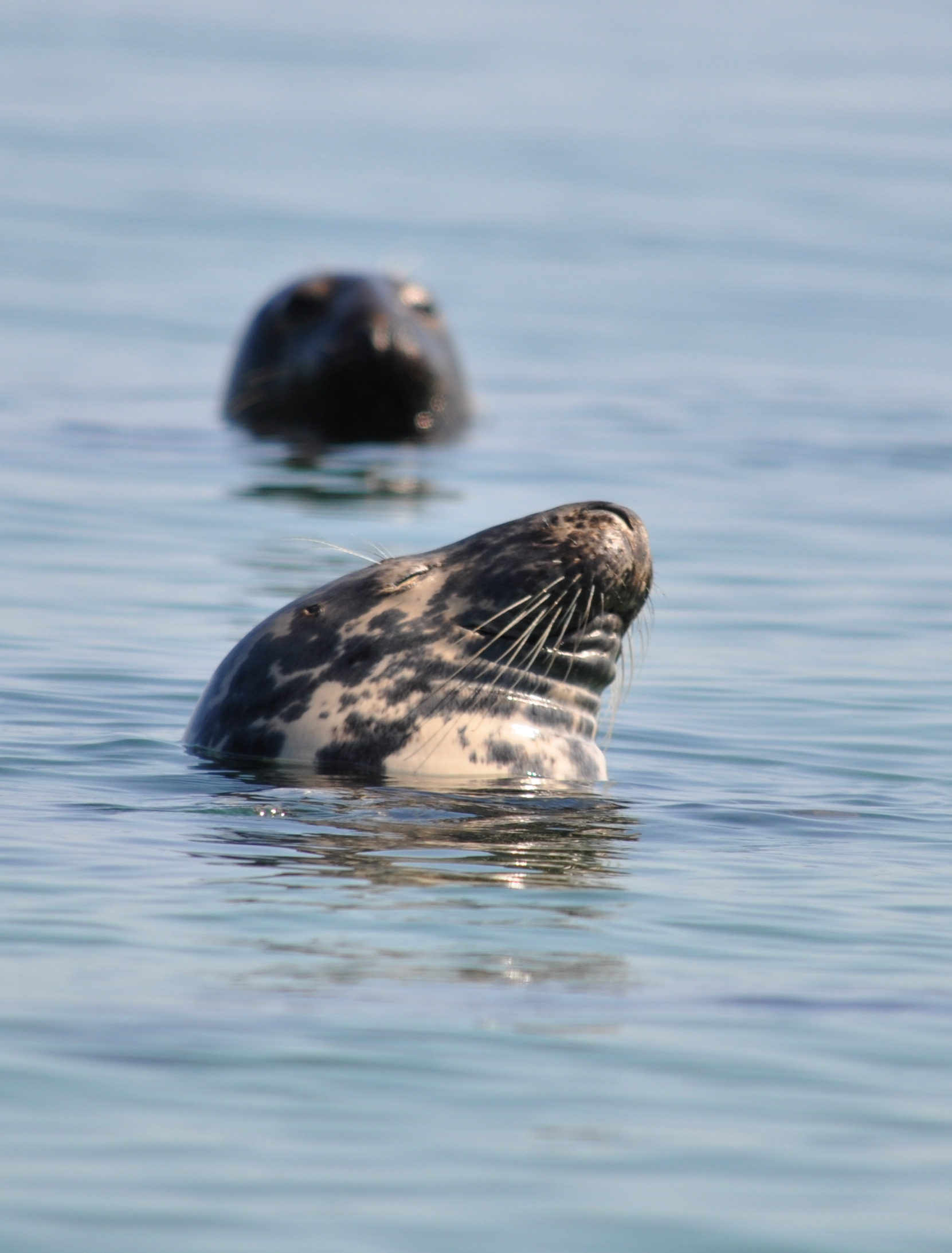 After leaving Camden we sailed down to Christmas Cove, a village in South Bristol ME. This was once territory of the Wawenock (or more precisely Walinakiak, meaning “People of the Bays”) Abenaki Indians, who traveled in canoes to hunt for fish, shellfish, seals and seafowl. In 1614, Captain John Smith explored the coast, and is said to have named Christmas Cove when he visited it on Christmas Day. 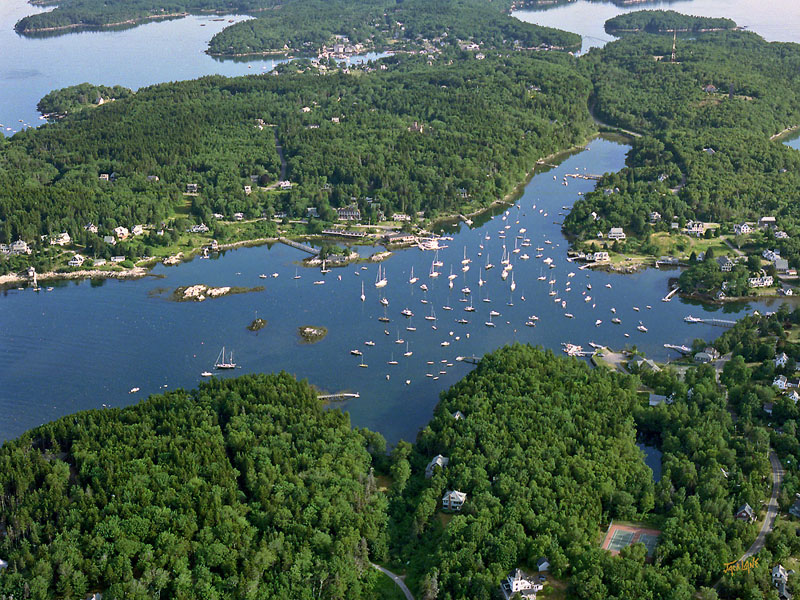 An aerial view of Christmas Cove
Our next stop was to drop off our guests and friends Dan & Linda at the Orr’s Bailey Island Yacht Club. They had been cruising with us for the last two weeks. We enjoyed their company immensely and all their help in avoiding lobster pot buoys. No one on board had a chance of losing weight with Linda’s wonderful cooking. Chef Dan’s lobster cooking at Swan’s Island will remembered as a highlight. 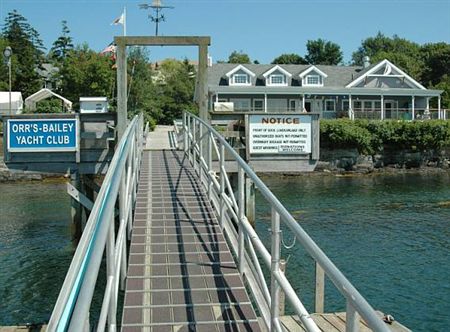 They had left their truck and kayaks in Orr’s Island so they could do some kayak camping on their return.
The bridge connecting Orr’s and Bailey Islands is quite unique. For many years, the fishermen who lived on Bailey Island wanted a bridge to connect their island with Orr’s Island, and for many years, the town of Harpswell turned down the request. But things changed when the Legislature approved a law allowing the State and the counties to participate in bridge funding, and in 1926, a contract was signed for construction of a new bridge.
The bridge design presented some unique problems because of the tides in the area. It was decided to build a crib bridge using granite slabs from nearby quarries, similar in design to a bridge that had been observed in Scotland. The granite slabs were sufficiently heavy to withstand the buffeting of wind and wave and the open cribbing or cellular construction permitted the tide to ebb and flow freely without increasing the normal tidal current to any appreciable degree. A concrete roadway was placed on top of the granite cribs. 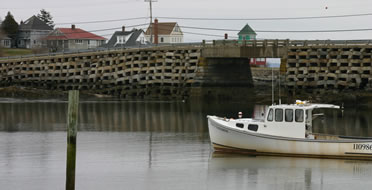 After leaving the yacht club we hopped over to Dolphin Marine on Harpswell Island for a few nights.

After leaving Camden and prior to arriving in Seal Bay we spent one night in Lunt Harbor in the town of Frenchboro which is located on Long Island, at the entrance of Blue Hill Bay, eight miles southeast of the town of Bass Harbor on Mount Desert Island. Harsh winters and very few conveniences are standard fare for the residents. The ferry visits the island three times a week, weather permitting. We found friendly and happy people living there which made our visit worthwhile. The economy of Frenchboro is lobstering and one great restaurant. 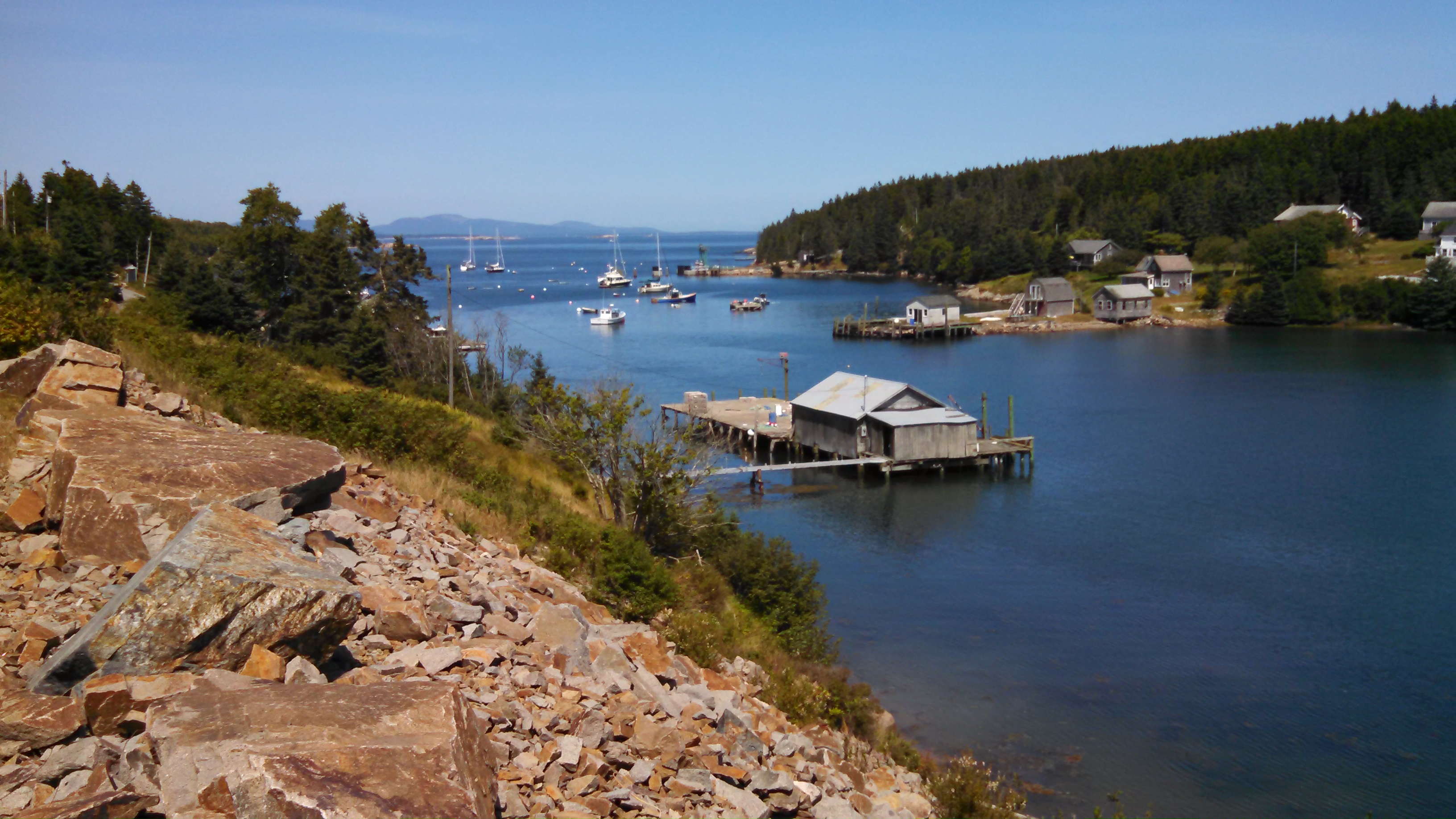 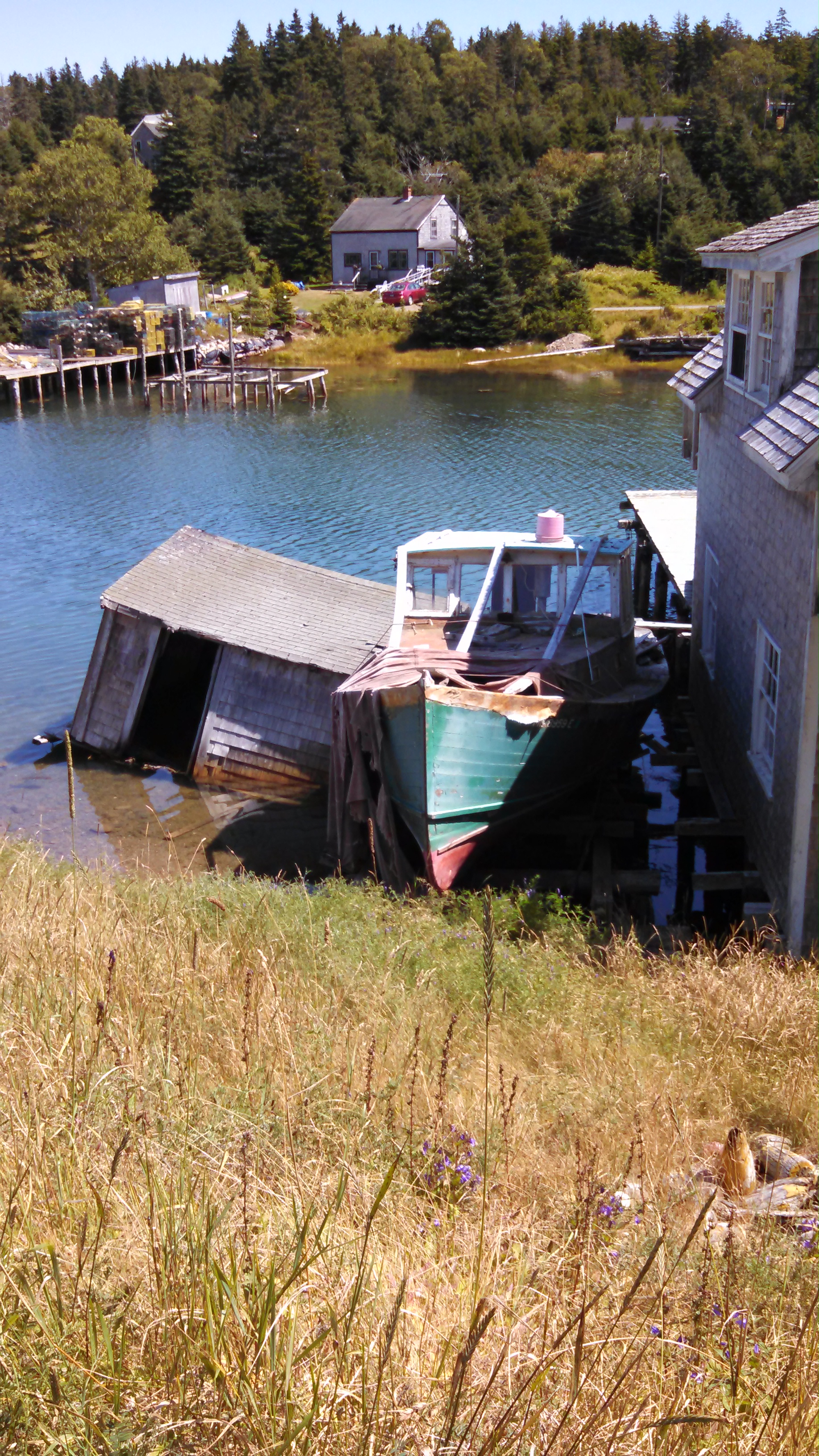