Rick and Cindy aboard Dark Star invited us to join them for pot luck at Flip Flop Beach, a small beach just north and west of where we are anchored.  This place is amazing!  It looks like it could have been the set for a Survivor series on TV.  The story goes that a cruiser started building this place away from the more populated areas, he didn’t like wearing clothes when on the beach.  Others joined him to help with the building.  I wonder what they were wearing?  They built a bar, benches hanging skull and a fire pit, just like Survivor.  The next night we went back with Rick & Cindy, Dan & Linda on Spice and another couple for yet another pot luck.  We didn’t follow the clothing tradition as you can see from the photos, or was that touched up with Photoshop… 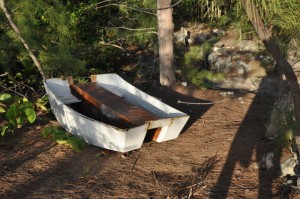 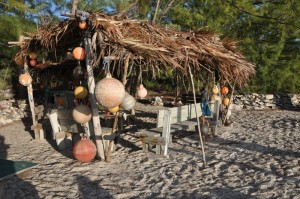 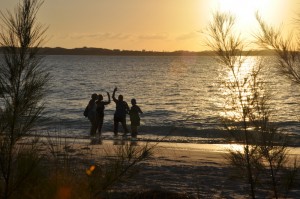 Another sunset, another round of Sundowners. 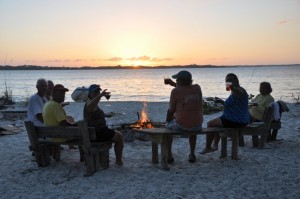 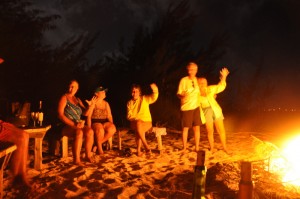 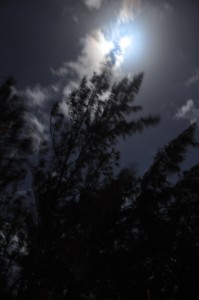 Moon rise, it was a dark and not-so-stormy night.

The longer we are here the more fun we have.  This week is the 33rd George Town Cruising Regatta.  Sailboat races both for the older “kids” and younger kids under 16.

Monday the 25th there was a dinghy parade that was a hoot.  The cruisers decorated their dinghies and themselves, check out the pics. 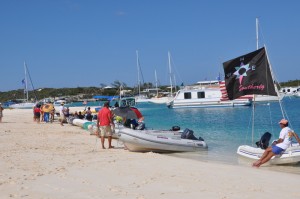 Dinghies getting ready for the parade. 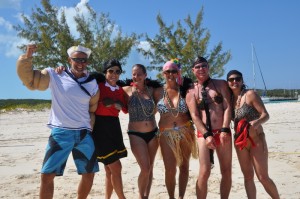 The winning crews, Popeye & Olive Oil from Popeye, and the crew from Outlandish,they won the Cruisers Gone Wild category. 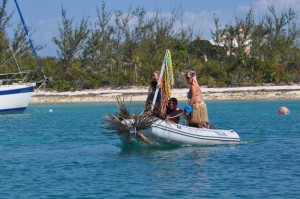 The crew of Outlandish. 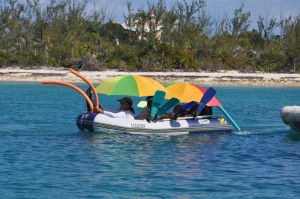 These guys were flapping their flippers and noodles, I thought they should have won some prize.

Tuesday the 26th was Opening Night.  The theme was “Cruisers Gone Wild”, a party that started with a “No Talent – Talent Show”.  I know you probably had to be here to appreciate the craziness but the Synchronized Swimming Team was so funny it had people peeing in their pants.  The photo does this skit no justice but here it is anyway. 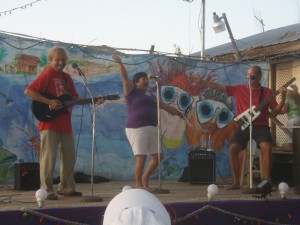 Cool Karen and the opening act, they were pretty good. 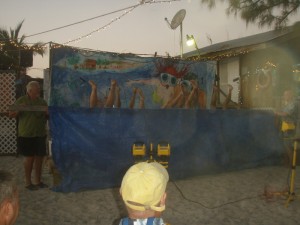 This was part of the Synchronized Swimming Team’s act, I guess you really had to be there, it was very, very funny.

Rockin’ Ron and Cool Karen from Sea Dancer provide the music and coordination for the opening night festivities and dance.  There was a raffle and Firecracker won the first bottle of wine.

Today, the 28th there was Beach Golf.  We dinghied down to Sand Dollar Beach, picked up our clubs, tees, golf balls and score cards and hiked over to the ocean side of the island where a 9 hole “course” had been set up on the beach.  The entire course was a sand trap with the ocean surf on the right and gnarly growth on the left side. A few, OK maybe more than a few, balls were lost.  Also, there to make life exiting, were coral outcroppings to make balls take sharp 90 degree turns.  It may look like we were at Pebble Beach, believe me we were not, but we had great fun.  Dan & Linda helped made up our foursome. 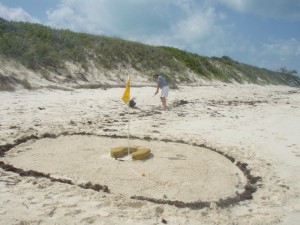 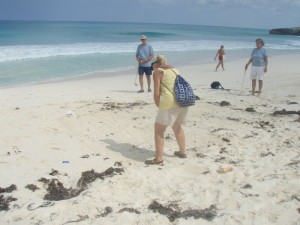 Linda, Dan, Ginnie and myself made up this awesome fore-some. 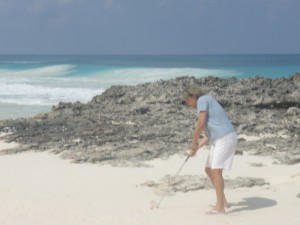 How’s that for form!  Kinda looks like Pebble Beach. 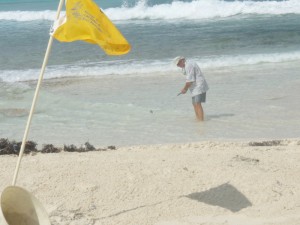 Ted waiting for the surf to recede, trying not to have to take a penalty stroke.

Tonight, thanks to one of the cruisers, we were told that the International Space Station was going to be visible in the north west sky at 1903 hours ( that’s 7:03 PM).  It was the brightest and fastest moving thing in the sky.  The space station orbits at between 205 and 255 miles above the earth and travels at an average speed of 17,239.2 MPH.  Tonight we saw the 81,842th orbit since it’s launch.  It circles the earth 15.7 times each day.