When we planned this trip we knew we would make our way to George Town but we thought we would stay a few weeks, well two months later, March 23rd, we finally weighed anchor and sadly started our trip up to higher latitudes.   What we experienced in George Town was a wonderful sense of community.   The friendships we made with other cruisers will, we hope, last a lifetime.

I mentioned previously that Volleyball Beach was the epicenter of activity.  Throughout our stay there were numerous presentations/seminars made by cruisers.  Keith from Camelot, another Saga 43, gave a talk on electrical systems, solar panels, battery charging and more.  He had about 75 people attend and the Q&A session just didn’t seem to stop.  I learned a lot about the proper way to charge batteries when you use solar power and a wind generator.   Another cruiser spoke on outboard repair, about 50 people attended and it was so popular that he had to do it again.  Every Wednesday at noon Bob from Cygnet had a VHF/SSB (Single Sideband)/ Ham radio meeting on the beach, at the end of the sessions he administered ham radio exams.

On Sundays, after Beach Church, Cordell Thompson, a local historian gave lectures on the history of the Exumas.  The crowd became larger every week.  He was charming, humorous, an excellent speaker.  Cruisers heading out to different destinations would meet on the beach, exchange experiences, and help those that were going for the first time.
Herman on White Wings volunteers to be the cruisers net moderator each morning at 8 AM on VHF channel 72.  He starts with weather, with reports from Chris Parker, Marine Weather Center Services and NOAA.  (We listen to Chris Parker every morning at 0630 hrs on SSB, and also get his emailed reports each afternoon.)  We also use other sources like Passage Weather to get a handle on the weather so that we can make decisions on when and where we should go when we are on the move.  After the weather local businesses come on to let us know what specials or services they have to offer, then the net opens for the activities that are scheduled for that day and in the future. Boaters General follows where people ask for help with problems they may have, ask for items they may need or items they want to sell.  When there were 300 plus boats here this segment could be long.  Just before we left Walter & Meryl on Flying Cloud notified the net that they had two seven speed folding bikes with storage bags available.  I jumped on the radio and we now have those two, like new, bikes on board Firecracker.  After boaters general Herman asks for the new arrivals and departing boats to announce themselves.  Most departing boats will say how sad they are to depart George Town, and most look forward to returning next year. 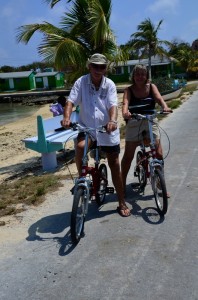 Our first ride on our new bikes, touring Little Farmers Cay.
Every year the cruisers Regatta Committee  organizes an amazing number of events including a race around Stocking Island, another race in Elizabeth Harbor, dinghy races, small boat sailing race, opening night celebration/dance, kids model boat races where the kids build their boats from boat parts and stuff found on the beach.  This was one of my favorite events.  We had a great time playing in the beach golf tournament.  Linda and Dan on Spice made up our 4 some.  Nine holes on the beach, (see previous posts).  There were also a number of volleyball tournaments, a dinghy poker run, a dinghy raft up in the middle of Elizabeth Harbor and a scavenger hunt to name a few events.