The entrance to Hatchet Bay was carved through high rocky cliffs.  The bay was once an enclosed pond or lake.  The entrance being so narrow, about 90 feet wide, you can’t see it until you are right in front of it.  We thought it was narrow until we saw the supply ship come into the harbor with what looked like a foot of clearance on each side.  I’m sure it was more, but not much.  The chart book warned of poor holding for the anchor but we had excellent holding in about 27 feet of water.  I think this was the deepest water we have anchored in this entire trip.  It’s much more common for us to be anchoring in 7 or 8 feet.  Remember our draft is 6’4”, lots of thin water here in the Bahamas. 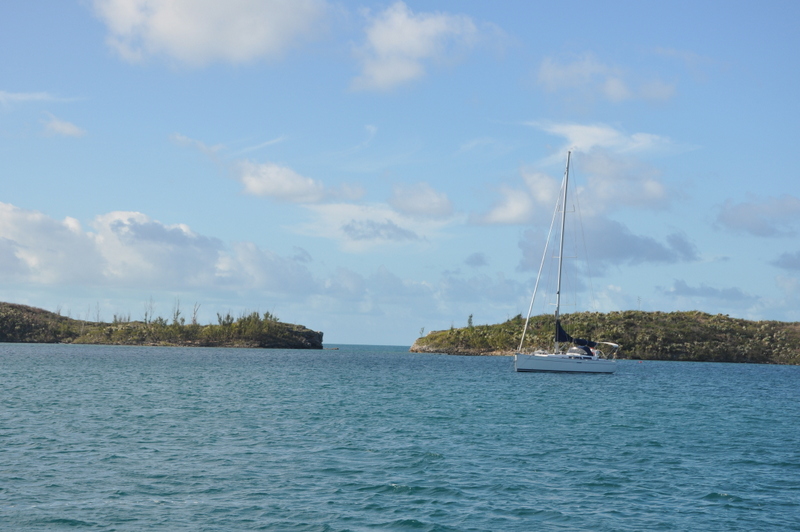 The entrance to Hatchet Bay 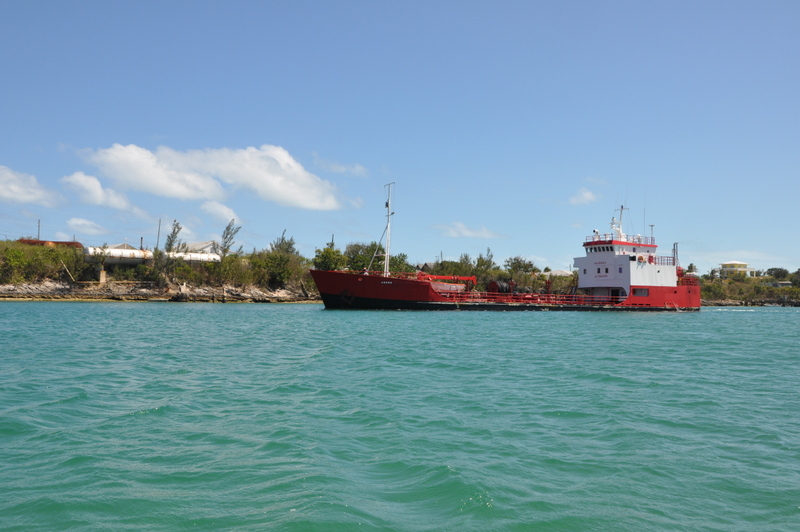 One of the ships that came through the cut above, yikes, not much room for error!

On Sunday the 7th we ventured off to see the cave that is about three miles north of town.  We were told that we should start walking and someone would stop and give us a ride.  This is not anything like home.  Shortly after we started our walk a car stopped and offered to take us right to the cave entrance.  The driver was Officer Roberts of the Hatchet Bay Police who was off duty and just stopped to see if we wanted a ride.  He dropped us off at the cave entrance, about three miles north of the settlement.  On our way back a car with three people returning from church offered us a ride back to Hatchet Bay, this is like life back home in the 1950’s.  Ginnie asked Officer Roberts if there was much crime here.  He said breaking up a few fights on the weekends and petty theft was the majority of his work.

Ginnie decided that the caves were a little too spooky, we didn’t bring strong enough flashlights and the rocks were slippery so she went part way in while I ventured a little further.  Going down the steel ladder leading to the lower level of the cave was the stopping point for Ginnie.  I didn’t get far enough in to see the bats, not such a bad thing I guess but I was able to get a few photos.  There was some graffiti on the walls near the entrance that spoiled the natural beauty of the cave.  Not being a spelunker, I can’t tell you the names of the formations. 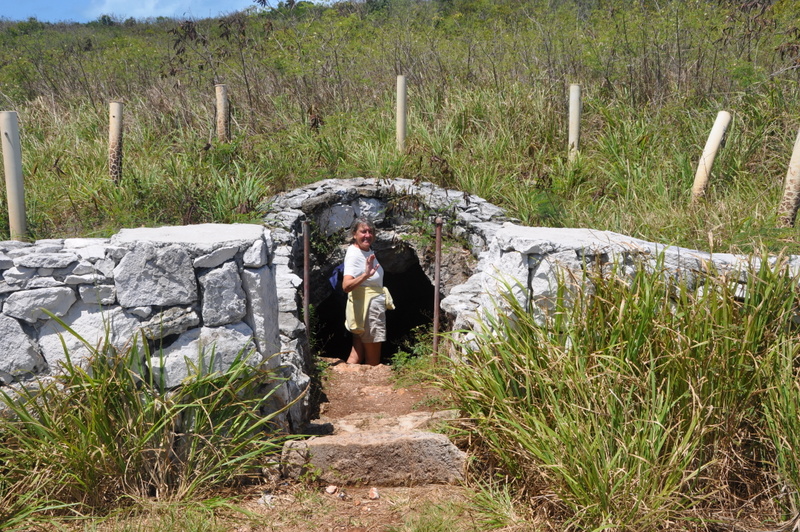 Ginnie at the entrance to the cave, that smile didn’t last very long. 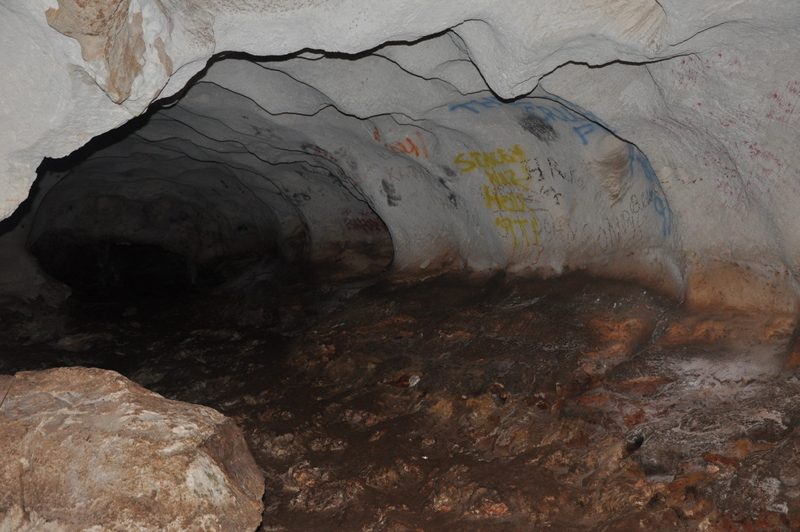 Graffiti at the entrance of the cave. 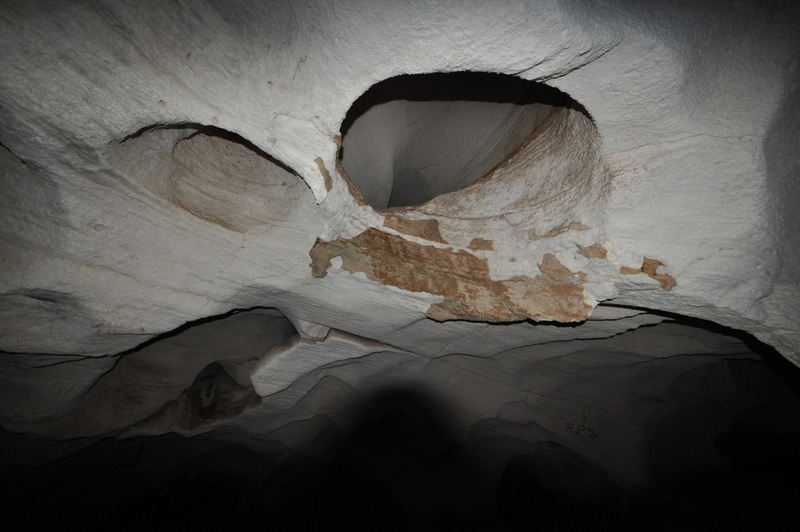 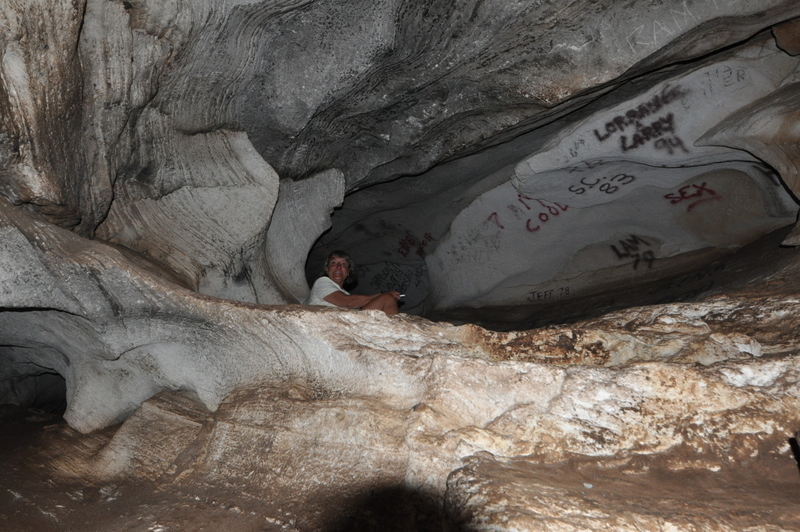 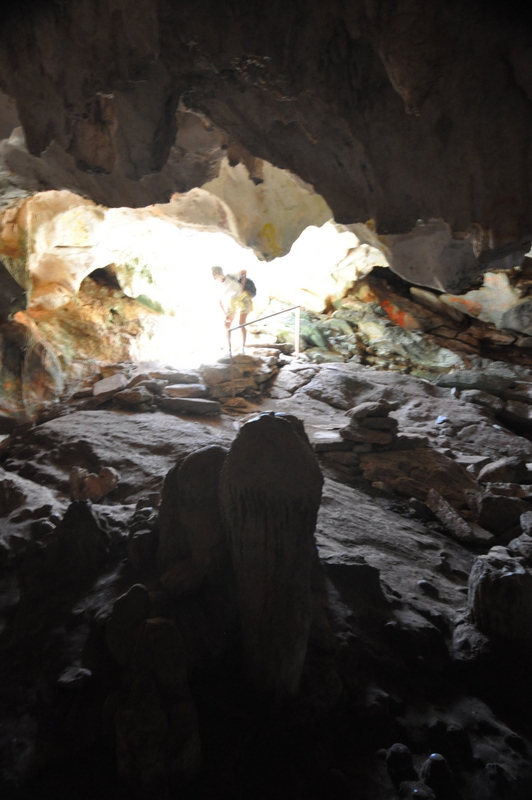 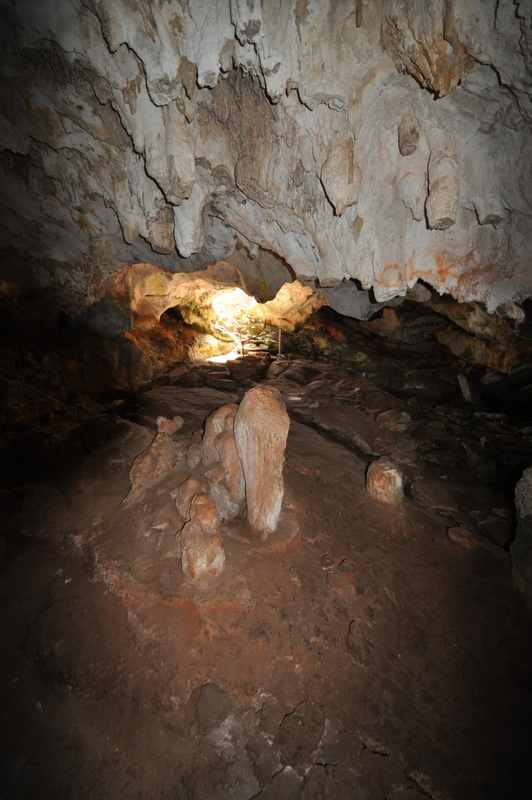 On our way back into Hatchet Bay we noticed these abandoned silos on the sides of the Queen’s Highway.  We were told by a local Bahamian that they had been part of the Hatchet Bay Farm, a thriving company, started in the 1950’s by a Massachusetts farmer.  The farm raised chickens and cattle, supplying all of the Bahama Islands and Cays.    Hatchet Bay Farm was taken over by the Pindling government in 1975, and nine years later the farm was closed, leaving many locals unemployed.  Locals blame the policies of the  Pindling government for the decline because they chased foreign investment away. 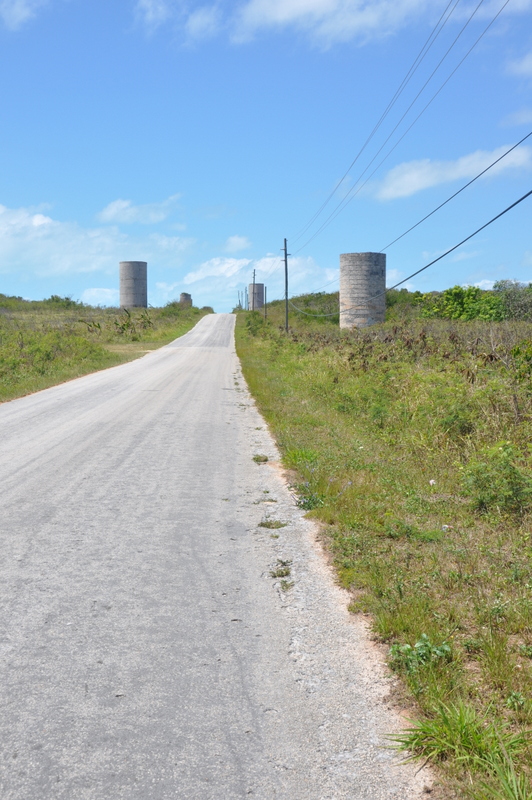 After being dropped off in Hatchets Bay from our cave adventure we literately ran into a man in his car herding his goats down the road.  I guess there is still some farming here in Eleuthera. 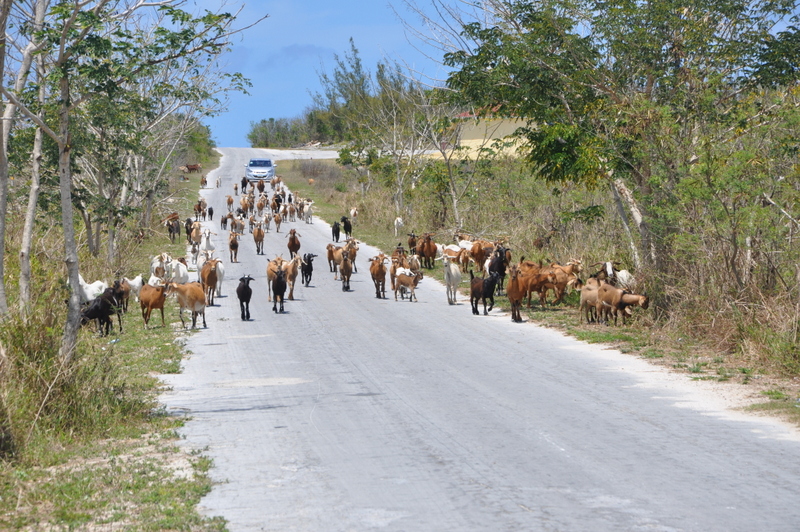 Check out the car herding these goats to another field. 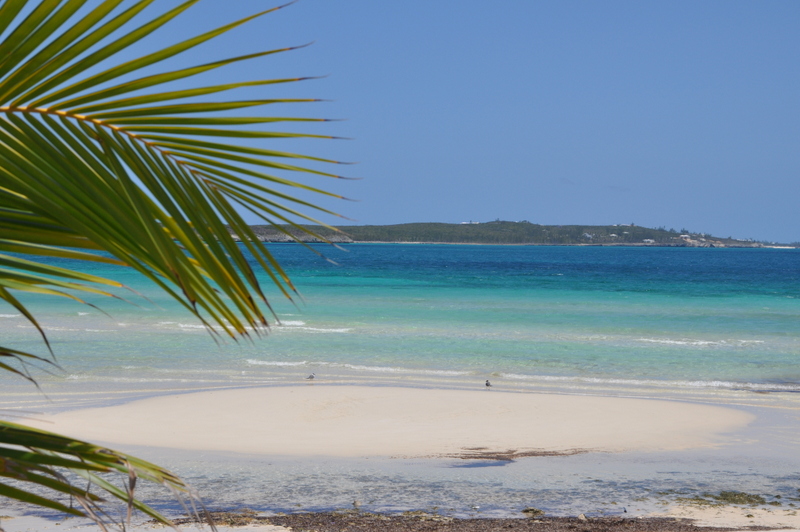 A beach on the Atlantic Ocean side of Hatchet Bay. 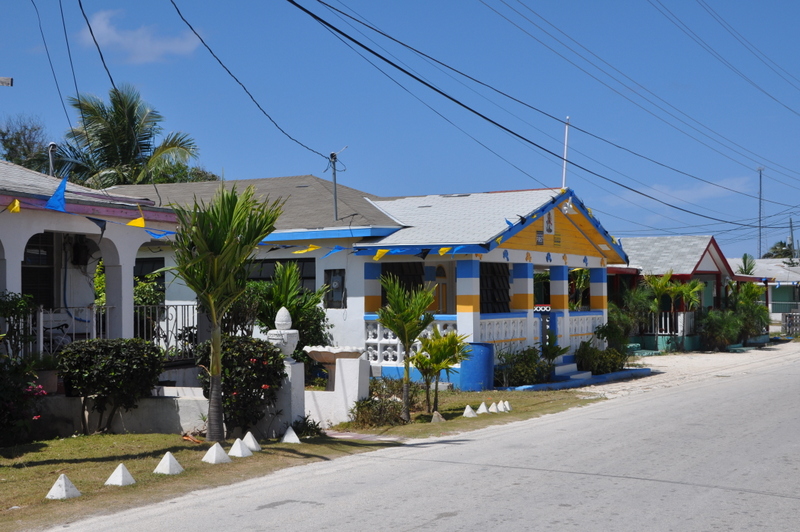 Check out the next photo… 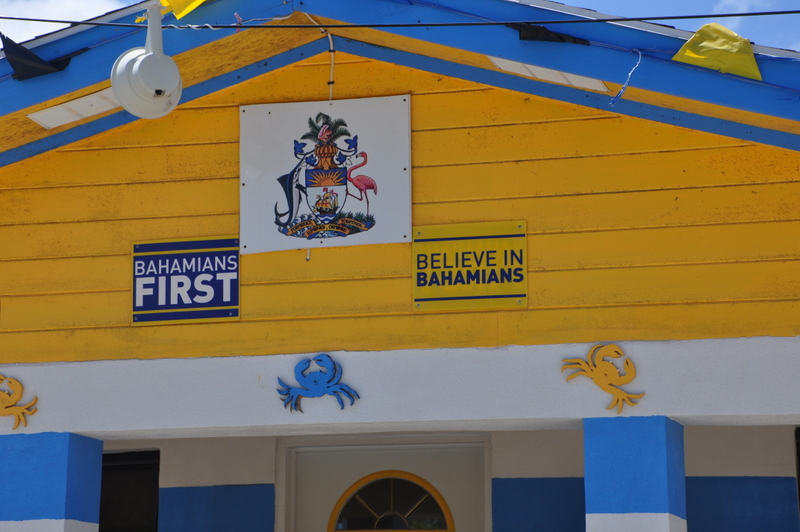 Now that’s someone that is proud to be Bahamian!