Ginnie and I had never raced Firecracker before; we didn’t even know what our handicap rating was.  All boats have to be rated, for this race the PHRF system was used and our rating was 81.  Performance Handicap Racing Fleet (PHRF) is a handicapping system used for yacht racing in North America.  It allows dissimilar classes of sailboats to be raced against each other. The aim is to cancel out the inherent advantages and disadvantages of each class of boats, so that results reflect crew skill rather than equipment superiority.

Boats in class A, our class, had ratings from 72 to 105.  As an example, another Saga 43 in our class, Camelot, had a rating of 87 because of her shallow draft keel.  This meant that for every mile in the race we had to give Camelot  6 seconds.  In a 20 mile race that means we had to beat Camelot by at least 2 minutes.  Sorry Keith but we finished ahead of Camelot by 3 minutes 19 seconds.  We beat the rest of the boats in our class by an even wider margin.  Our first race and we won!!  Only one other boat, Double Trouble, a 58’ Catana catamaran sailed the course faster than us.  All the catamarans raced in their own class.

On our way out to the start of the race. 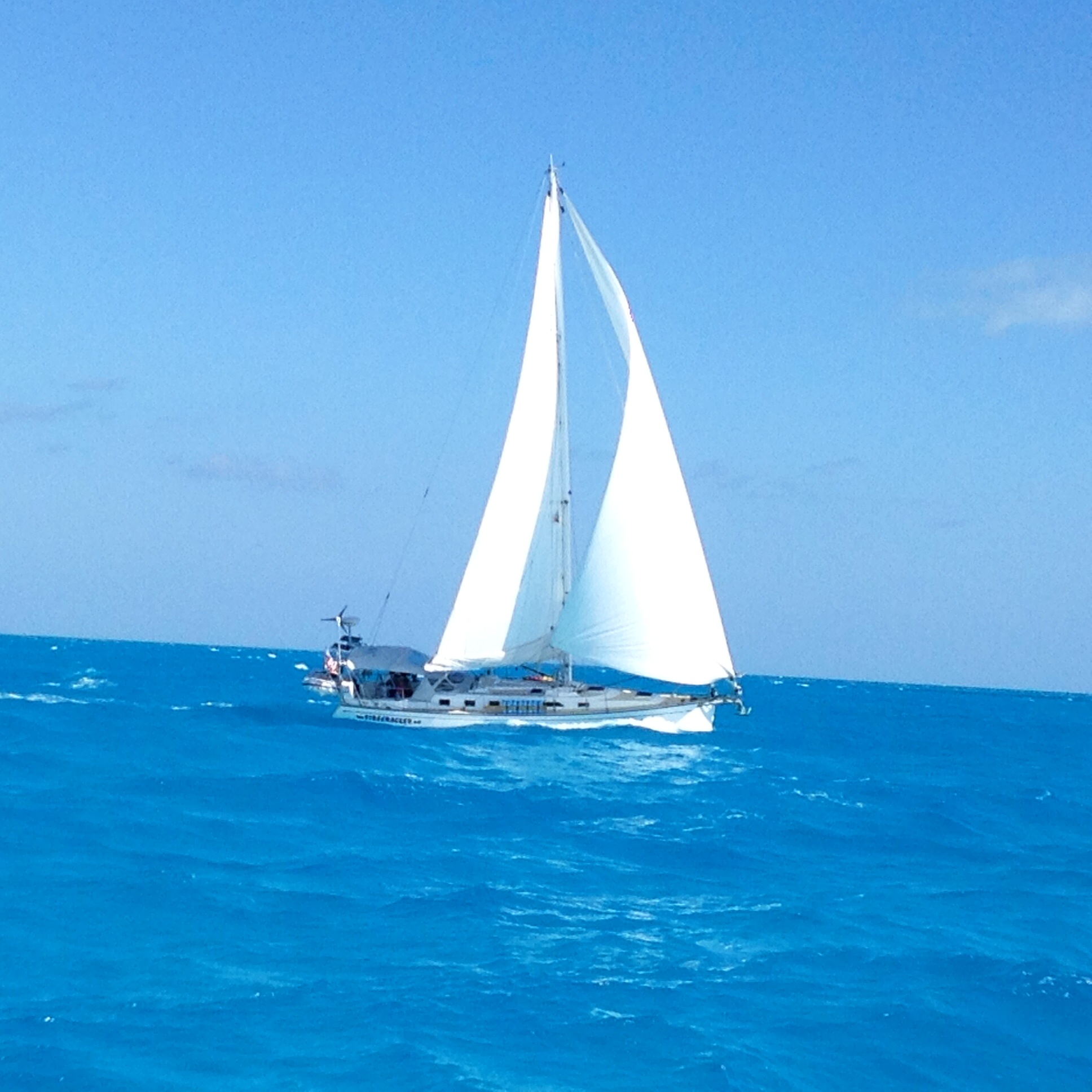 During the race, photo taken by Bill on Providence.

Photo by Cheryl on Double Trouble, racing on auto pilot, how decadent.

Double Trouble, the only other boat to beat us on actual race time. 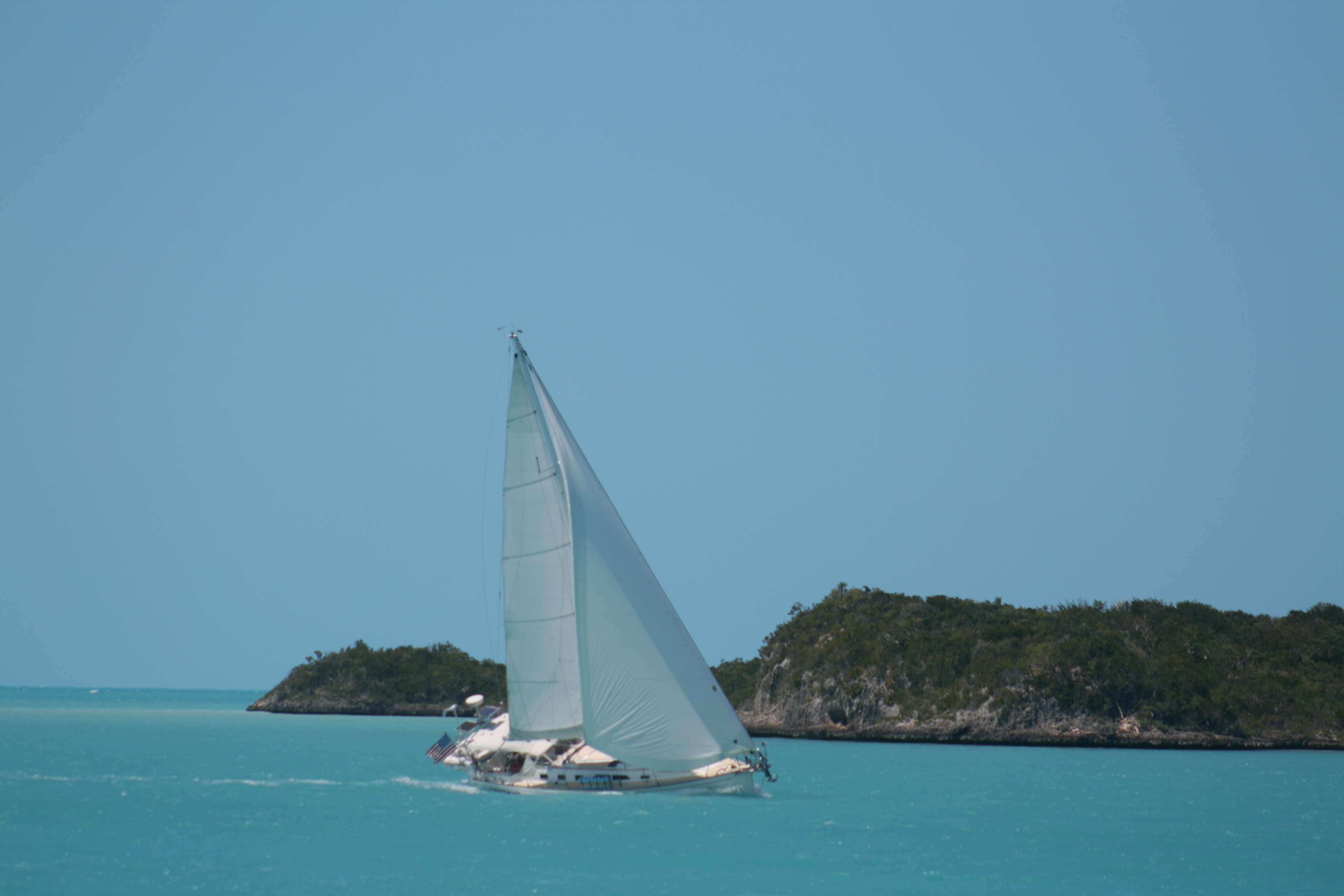 Firecracker approaching the finish line, rail down and flying! 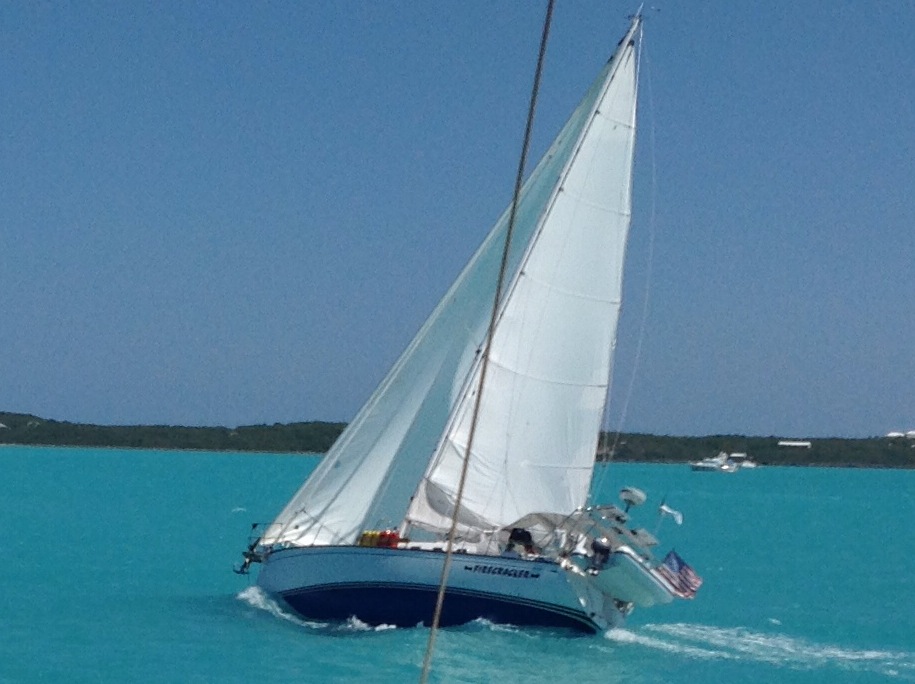 Just after the finish.

There was a pot luck with appetizers at the Long Island Breeze restaurant on Saturday night after the race.  Sunday we walked over to the east side of the island with the crews from Barefoot’n and Dark Star to find shells for Ginnie’s baskets.   On Monday there was a tour of the island.  We started at Thompson Bay and went north to Cape Santa Maria and the Columbus Monument, then south to Clarence Town and back to Thompson Bay with just enough time to get back to the boat to clean up and be ready for the dinner and awards ceremony at the “Breeze”.

The dinghy dock at Long Island Breeze, 42 dinghies and more on the beach. 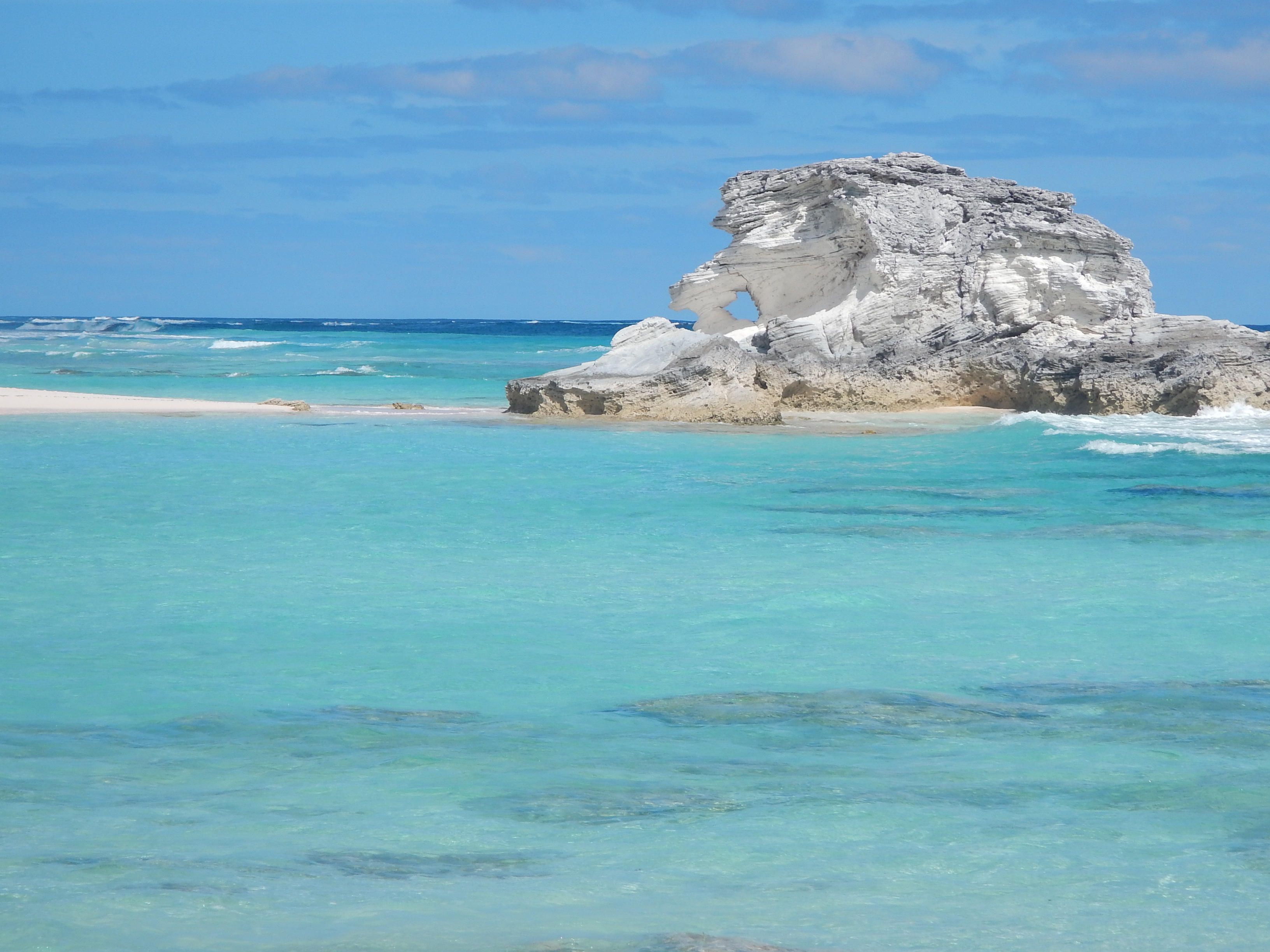 There was this great outcropping of coral on the ocean side, check out the hole in the coral.

Cindy from Dark Star took this photo of us near the hole in the coral.

The Bahamas are truly spectacular.

This little guy was alive and well living on a coral outcropping. 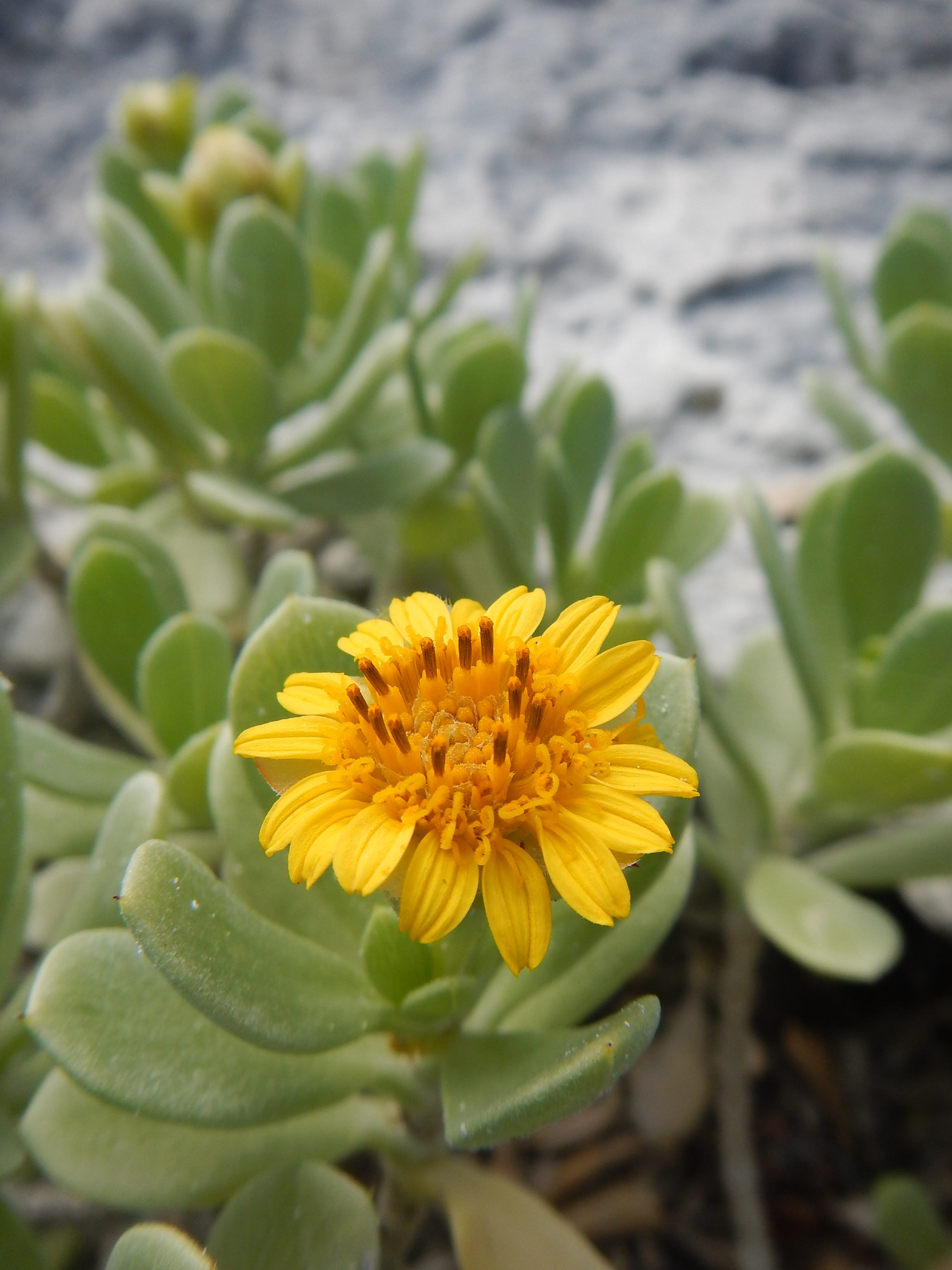 It’s amazing to be walking on a large outcropping of coral and see a small plant with a flower growing in a tiny crevice of the coral.

Originally named “Yuma” by Arawak Indians, the island was renamed “Fernandina” by Christopher Columbus in 1492. However, Long Island earned its current name because a seafarer felt it took too long to sail past the island. After all, it is 80 miles long, but no more than four miles wide at its broadest point. Long Island has two very different coastlines—the dramatic cliffs and caves of the east coast that front the crashing Atlantic waves, and the sandy edged lee side which slopes calmly into the Bahamas Bank.

The Christopher Columbus Monument at the North end of Long Island.

Sts. Peter and Paul Catholic Church is found in Clarence Town, Long Island.  It is one of the many buildings constructed by Father Jerome Hawes.  Last year we visited The Hermitage on Cat Island built by him as his home. 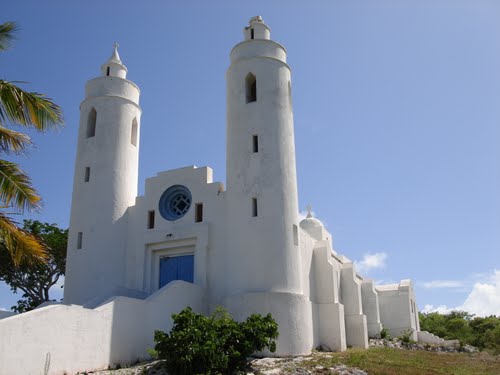 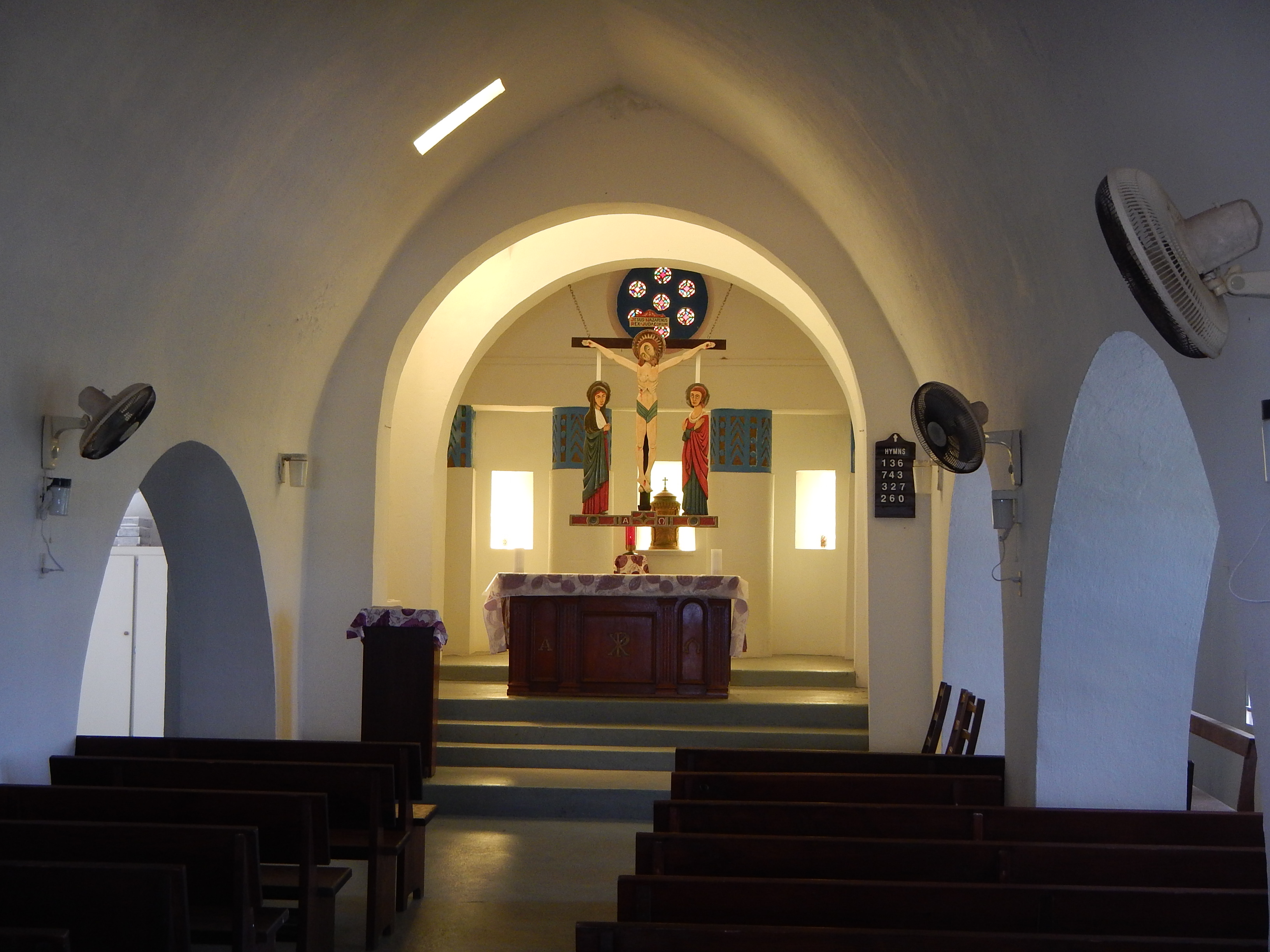 Inside Sts. Peter and Paul Church. 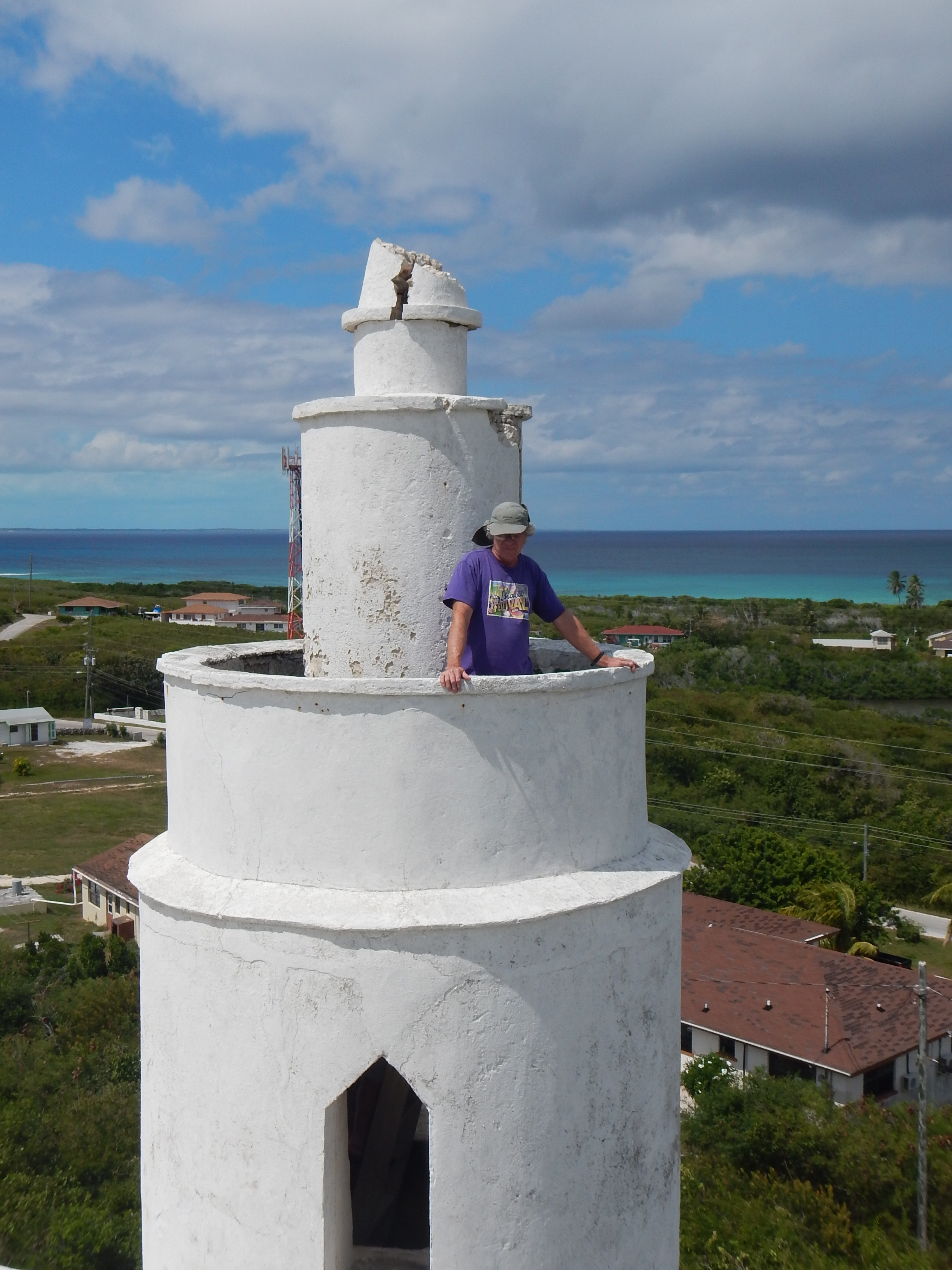 Lee from Alesto 2 up in the right tower of the church. We were in the left tower.

Upon Father Jerome’s return, he designed and constructed a number of buildings in the Bahamas – Sts. Peter and Paul Catholic Church being one of them.  The church sits atop a hill in Clarence Town and its twin spires can be seen for miles around.